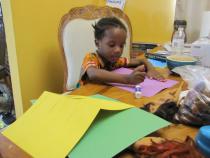 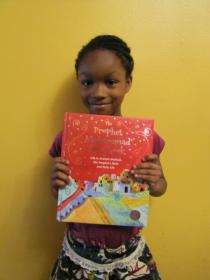 (Photo by Sarah Ventre - KJZZ)
Angelica Lindsey-Ali's daughter, Yabara Ali-Dolo, shows one of the books she'll read during the month of Ramadan. 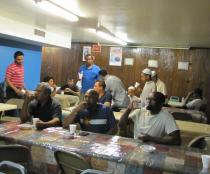 (Photo by Sarah Ventre - KJZZ)
Men at the Islamic Community Center of Phoenix break fast after the first day of Ramadan with dates and water. 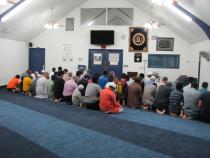 The Muslim holy month of Ramadan began this week, and it signifies the beginning of the revelation of the Quran to the prophet Muhammad. Muslims around the world observe the month by praying, listening to recitations of the Quran, practicing charity, and by not eating or drinking during daylight hours, which may seem difficult for Muslims in the Arizona desert.

Many who observe Ramadan begin preparing in advance. A few days before the beginning of the month, Angelica Lindsey-Ali and her family were busy making decorations and talking about the ways they planned to celebrate. She and her kids sat around the table at her in-laws, unfolding big shiny stars and making paper lanters.

"It’s like having Christmas and Thanksgiving and Easter and New Years all rolled into one, but for 30 days," said Lindsey-Ali as she laughed.

If you don’t observe Ramadan, that might not be what you expect, since everyone is fasting over long, hot days. It’s true that the fast isn’t always easy.

"It’s difficult, but if you go in it with the right intention it’s not as hard as everybody makes it seem," said Lindsey-Ali. "It's not that you’re depriving your body of food. I like to say that you’re making space in your mind and your body for God."

This idea is central to understanding Ramadan. While non-Muslims may focus on the difficulty of the fast, or the fact that not drinking water during a desert summer is often ill-advised, many Muslims will quickly point out that the fast is only one part of observing.

"It’s a time for complete peace," said Valley resident Azra Mahmood. "It’s the religion. It’s the Holy Quran. It’s everything coming alive in the people, in the motion."

Mahmood grew up Muslim, but connected most strongly with Ramadan during college when she lived in Kentucky and she didn’t know many other Muslims nearby.

"I found Islam and Ramadan to be most engaging when I was in solitude," said Mahmood. "When I actually was very alone and didn’t have a community to fast or to break fast with or to enjoy all the rituals that we do."

Mahmood said the act of fasting helped her connect with spirituality and her identity as a Muslim. It is also how she began to find community. That came first with non-Muslim friends in college who would fast in solidarity with her, and eventually with other Muslims on campus.

At the Islamic Community Center of Phoenix (ICCP) many people come to observe the holy month as part of the community. On the first night after the fast, a few dozen people anxiously waited for the time to eat as they sat around tables with cups of water and bowls of dates on them.

"We bought 30 cases yesterday, so there’s a lot. That’s 330 pounds," said Usama Shami, president of the ICCP. It is traditional to break the fast with one, three, or five dates and some water. After that there are prayers, followed by a complete meal, called iftar.

Rosie Bera is one of the women gathered in a small classroom to eat dinner after fasting for at least 15 hours. Plates were filled with chicken, rice, and salad, and even though she was very hungry, she didn't eat until she said hi to everyone she knew in the room.

"I like to be close to my sisters, you know, to feel that happiness," said Bera.

Bera converted to Islam just over a year ago. She grew up in Mexico, and is the only one in her family that is Muslim. She said she was searching for something deeper when she found the religion.

"When I [heard], 'Allahu Akbar, Allahu Akbar' I [started] crying," Bera said with tears in her eyes. "And I [understood] that that was God calling me to Islam."

At the community center, she explaied that she is happy to fast because Ramadan means so much to her.