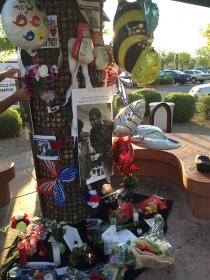 Tributes are pouring in from Arizona and beyond for boxing legend Muhammad Ali, who died Friday night at Honor Heath Scottsdale Osborne Medical Center.

Ali, who was a longtime Valley resident, was 74.

Family spokesman Bob Gunnell said Saturday that Ali was admitted to the hospital Monday, and his close family was by his side when died of he called natural causes related to his decades-long battle with Parkinson’s disease.

Gunnell said the funeral would take place in Ali’s hometown of Louisville, Kentucky on Friday and that it will be true to his Muslim faith, but inclusive for all.

“It’s going to be in the Muslim tradition. Muhammad truly loved  all people. This whole service, the service, the funeral plans,  were done years ago by Mr. Ali who discussed them personally,” Gunnell said.

Although there are no immediate plans for services in the Valley, local Muslim community leaders are inviting the public to remember him Sunday evening at the Islamic Community Center of Tempe.