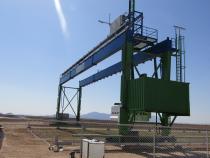 (Photo by Casey Kuhn - KJZZ)
The LemnaTech scanalyzer in Maricopa, designed in Germany. 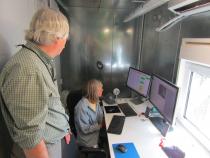 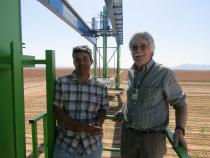 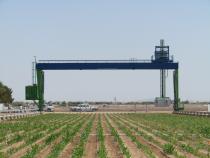 (Photo by Casey Kuhn - KJZZ)
The scanalyzer stands over the sorghum field.

In the middle of a field of sorghum, near Maricopa, a giant robot is at work. Scientists are using that machine to study biofuel crops under drought conditions. To do this, the U.S. Department of Energy has invested millions into this first of its kind robotic recording system. This new tool will help fuel and feed a growing population, with dwindling water supplies.

A giant blue and green metal square sits in a field in front of the University of Arizona agricultural research center. It looks sort of like a crane with a box attached to a hanging arm moving slowly back and forth, kind of like a huge 3D printer.

“We had one person come and ask if this had something to do with NSA, or communicating with aliens or something,” said Jeff White, U.S. Department of Agriculture plant physiologist.

No, they aren’t trying to find extra-terrestrial life in space — rather, they’re looking the other way, zooming in on little details in the earth.

“It’s like our eyes. We look at crops and we look at how tall they are, how big, how green," Sanchez said, explaining how the machine works. "What we’re doing with this system is using sensors to measure those same elements.”

And the big box scanning plants isn’t just recording how they look. The sensors can also see non-visible light, which helps researchers understand how the plants are going through photosynthesis.

White said it’s a huge leap forward from walking through the fields and recording by hand.

He said the scanalyzer is to agriculture as … “[p]erhaps the Hubble Space Telescope and astronomy, where I think people knew it was going to be very powerful and interesting," White said. "But it’s just astounded the world."

White and Sanchez spoke to another researcher who recorded 180 plants in the last four hours. The scanning device can get all 42,000 crops in 11 hours.

Do some quick math, and that means what the scanalyzer can do in half a day, would take one human five weeks, non-stop to finish.

“There’s really no way to compare it. You can have an army of people trying to get these things and it’s not going to be the same,” Sanchez said.

The crops are sorghum plants, which can be grown for animal feed or, more importantly, biofuel. That’s where the Department of Energy comes in. It has put millions of dollars into this as part of a larger effort called the Transportation Energy Resources From Renewable Agriculture (TERRA).

TERRA director Joe Cornelius said the huge amount of data the scanalyzer gets will be key looking forward.

"This is the future of agriculture and land management broadly, in context the challenges we face require very large data sets," Cornelius said.

And while the hot, dry conditions of Arizona probably isn’t the first place your mind goes to when you hear "farm research," researcher White said it’s just another way to prepare for a future with less water and more people.

"There’s only a limited amount you can do if it’s too hot and too dry if you don’t have access to irrigation," White said.

Cornelius said this research will be like “open-source seeds.”

“Everything you see at the Maricopa site will be made publicly available,” Cornelius said.

Don’t count on a miracle seed any time soon.

“This is not going to be something where we see huge increases in sorghum in the next three, four years, but at the 10-year mark we might begin to see an impact at the level of commercial material,” he said.

At the end of the tour, in a show of trust, Sanchez invites me up to the top of the rig. He insists the 50-foot ladder climb is worth it.

“From the ground, it’s just a big thing. From here, you see detail, you see a lot of elements ... you can feel it!” said Sanchez.

The scanalyzer is being unveiled June 2 at an inauguration.