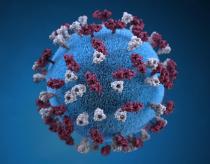 (Photo by Centers for Disease Control and Prevention)
An illustration of a spherical-shaped, measles virus particle.

There are now 11 confirmed cases of measles in the state of Arizona. All of the cases are either detainees or staff at a federal detention center in Eloy.

Jessica Rigler, of the Arizona Department of Health Services, said that one of the difficult things about containing measles is that those who are infected may not experience symptoms for up to 21 days.

“That means we’re looking at a couple months at least of a response from public health to make sure that we’re identifying all measles cases, figuring out where they may have gone in the community, and then notifying those community members they were potentially exposed,” said Rigler.

Measles symptoms start out like a cold or flu, but about four days after that people will develop a rash that starts at the hairline and spreads down their face and down the rest of their body.

“Measles is highly contagious, so up to 90 percent of people who have not been vaccinated against measles will come down with it if they come into contact with someone who has measles,” said Rigler. “It’s very concerning that we’ll see additional cases popping up, just because measles symptoms don’t appear until after you’re contagious. So sometimes you are sick and you don’t know and you’re spreading that disease to others.”

The state health department is urging people who think they may have been exposed to measles to call their doctor or emergency room before getting checked, so staff can take precautions to prevent the spread of the highly contagious disease. The agency also lists on its website places where exposures may have occurred.