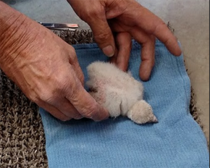 (Photo courtesy of Arizona Game And Fish Department)
Wildlife officials were able to return the chick to its nest within an hour.

(Photo courtesy of Arizona Game And Fish Department)
Veterinarians x-rayed the chick and placed small splints on the bird’s legs.

A 9-day-old peregrine falcon born high above downtown Phoenix is getting a little help from wildlife officials.

Volunteer veterinarians have outfitted the baby bird that hatched earlier this month with small leg braces after wildlife monitors noticed the chick was struggling to stand and flap its wings.

The nestling hatched on Mother’s Day in view of a new Arizona Game and Fish Department webcam set up to monitor falcons nesting on a Maricopa County building. But officials turned off the camera Monday and retrieved the struggling baby falcon while its parents were away from the nest.

“We wanted to take it out of the nest for as little time as possible and not upset the parents while we assessed the situation,” said Watchable Wildlife Program Manager Randy Babb. “He showed some signs of congenital problems like laying on his back.”

The department consulted with falconer Daniel Pirotte and the Phoenix Dog/Cat/Bird Hospital, where veterinarians x-rayed the chick and placed small splints on the bird’s legs.

“We shut down the camera because we knew the mom, like any mom, would be upset by the misplaced kid,” Babb said. “And she was, so we didn’t want the public to get upset.”

Wildlife officials were able to return the chick to its nest within an hour. Officials also laid a layer of brown artificial turf in the box this week to give the chick more traction to stand. Veterinarians hope to remove the leg splints in a week or so.

The camera was turned back on Wednesday morning.

Once endangered because of widespread use of pesticides, peregrine falcons are now thriving, especially in Arizona, he said.

“They’re doing better here than virtually anywhere else because they like to nest on cliffs and cities provide a very cliff-like environment,” Babb said.

Game and Fish had been trying to get the peregrine falcons to use the nesting box atop the county building on Third Avenue and Jefferson Street for nearly 10 years. This spring, a female laid four eggs in the nest, but three of them were damaged and removed.

A donation account has been set up to help defray the costs of the department’s cameras.

EDITOR'S NOTE: The story have been modified to reflect the correct age of the baby peregrine falcon.