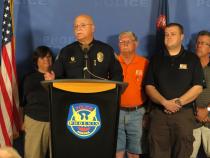 Phoenix police seized weapons, heroin, cocaine, and 20 grams of methamphetamine from the Las Palmas Inn near 7th and Grand avenues, the department announced. The seizures were part of a sting called “Operation Hurricane.”

The owner of the Las Palmas Inn lives out of state, police said, and as of now there's no reason to believe he was aware of the alleged activities taking place on the property. But that doesn’t go for all of the employees, police said. Several, including the manager, were arrested.

Police Chief Daniel Garcia said Operation Hurricane was successful because it was a part of a community effort that involved multiple organizations, including an association of local businesses.

"Policing is a shared responsibility," Garcia said. "It is not just the police department going out there and doing police work that we have to do. But it’s also making sure that the community understands why we’re going there and supports the initiative.”