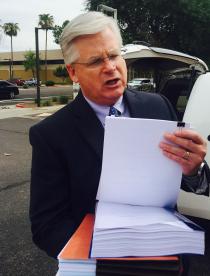 (Photo by Will Stone - KJZZ)
Attorney Tom Ryan is well known for wading into the political arena. He recently led the effort to oust the chairman of the Arizona Corporation Commission over conflict of interest issues.
(Photo by Jude Joffe-Block - KJZZ)
Arizona Secretary of State Michele Reagan
(Photo courtesy of Tom Ryan)
This poster from Gov. Doug Ducey's office offers words of endorsement for Prop 123.

An Arizona attorney who tried unsuccessfully to stop next week’s special election is now calling for the impeachment of Secretary of State Michele Reagan.

On Friday, Tom Ryan blasted Reagan for a glitch that prevented hundreds of thousands of voters from receiving their ballot guides far enough in advance of the election. The attorney and activist has asked Attorney General Mark Brnovich to delay the May 17 election because about 200,000 households with voters on the permanent early voting list did not receive their publicity pamphlets the required ten days before voting.

Brnovich will not intervene this close to the election, saying the statute does not actually provide a "remedy" for this situation. However, Brnovich called the error a "fiasco" and is investigating what happened and why Reagan did not alert the public last month when the issue was first discovered.

Meanwhile, Tom Ryan said the elections director should resign and the legislature should move to impeach Reagan.

“It’s about whether or not the secretary of state has the right to put her thumb on the scale and defeat the citizen’s right to get the message out that opposed or supports a particular bill she’s out campaigning on,” said Ryan.

Ryan contends Reagan not only tried to cover up the mistake, but is biased toward Proposition 123 — Gov. Doug Ducey's plan to tap the state land trust for billions in education funding. Ryan is a vocal opponent of Proposition 123.

Specifically, Ryan points to a poster put out by Ducey's office with statements from various elected officials, including Reagan. Her statement on the poster reads: "The Governor's state land proposal is sound policy because it brings in nearly $1.8 billion in new dollars to the classroom without raising taxes...I'm proud to stand alongside Governor Ducey in supporting public education."

But a spokesperson for Reagan said she has not taken a formal position on the ballot question.

The publicity pamphlets contain arguments for and against Proposition 123 and Proposition 124, as well as other information like polling locations.

As many as 400,000 voters or more could have been affected by the mistake, which a Reagan spokesperson said is the result of a mail merge error by the printing company.