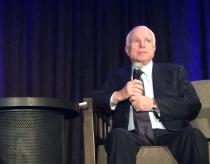 Last summer, Trump went as far as to mock McCain for being a prisoner of war in Vietnam.

Still, McCain — the one-time Republican presidential nominee himself — has vowed to back whoever is the Republican nominee this year, including Trump.

But that support for Trump could make McCain’s own reelection race much tougher. McCain is running for his sixth Senate term.

At a fundraiser last month, McCain told donors he’s worried that Trump’s language on Mexican immigrants and the border wall could damage the GOP brand with Arizona’s growing share of Latino voters.

Politico released a recording of those comments on Thursday morning.

“The Hispanic community is aroused and angry in a way that I have never seen,” McCain is heard saying in the recording. “So this is going to be a tough campaign for me.”

Nevertheless, just a few hours after those comments hit the internet, McCain appeared at an Arizona Chamber of Commerce and Industry luncheon and stuck with his longtime position that he will support the Republican nominee — and would therefore support Trump.

“I will support the nominee of the party, both Jeff and I have said that all along,” McCain said, referring to Sen. Jeff Flake, who joined him on stage. “There is no doubt significant disagreements that I have with Mr. Trump. I will do everything I can to convince him on national security issues that he needs to do differently than he planned.”

Speaking to reporters afterward, McCain tried to downplay the idea that Trump would hurt his own reelection.

“Oh, I think there are some aspects that make it somewhat more difficult,” McCain said. “But the advantage I have is that 100 percent of the people in Arizona know me, they know me. So I believe they will make their judgment on me and my record and what I can do for Arizona, rather than on Donald Trump.”

But McCain may not have it so easy, said Chris Herstam, a lobbyist and a former Republican state lawmaker.

“When you are running for the U.S. senate and you endorse an individual who has made those comments, it is going to rub off very negatively on yourself,” Herstam said.

“That is a factor that McCain has never had to play with.”

Polls show a tight race between the two.

“The fact that there are more Latinos than ever that will be voting in this election, and that they are enraged about Donald Trump, and now McCain is supporting Donald Trump. That is nothing but bad news for John McCain and good news for Ann Kirkpatrick,” Herstam said.

Kirkpatrick seized on Trump’s role in the Senate race months ago. She released an attack ad back in February that mixes some of Trump’s most controversial statements with footage of McCain vowing to back the nominee even if it is Trump.

Many prominent Republicans have come out saying they won’t vote for Trump.

At the same Chamber of Commerce lunch on Thursday, Arizona Sen. Jeff Flake stopped short of saying he would support Trump despite a comment by McCain suggestion that both senators would.

“It will be very difficult for me to support Donald Trump if he doesn’t back down from some of the statements he made,” Flake said.

But it is more complicated for McCain to take a position on Trump given how polarizing the Republican nominee is. While Trump has high unfavorable ratings among certain demographics, he also has a strong base of supporters in Arizona.

After all, Trump won the Arizona presidential preference election by more than 20 points in March.

Stan Barnes is a former Republican state senator and lobbyist, and he said McCain can’t afford to upset Trump’s supporters.

“His constituency is more motivated and more energized than any constituency we’ve seen in many elections,” Barnes said.

Barnes said McCain built his political brand around being a maverick and says he should embrace much of what Trump represents in a year when many voters are fed up with politics as usual.