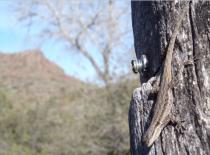 (Photo by Andrew Bernier - KJZZ)
If you catch a lizard by it's tail, it may detach. Now, researchers may know what molecules are responsible, three "microRNA" molecules, for it growing back.

If you’ve ever caught a lizard and it broke off its tail to get away, you may know it will grow its tail back. Now, researchers in Arizona have identified the specific molecules that makes that possible — and hope to apply the findings to help humans regenerate parts of their body as well.

TGEN’s Elizabeth Hutchins said new tiny molecules of ribonucleic acid, or microRNAs, which read your DNA and assist with protein making, may help understand how regrowth of structural tissue works.

“These small RNAs turn on and off hundreds of genes at a time so they’re master regulators," said Hutchins. "Some of the ones we identified humans have as well. And then we also identified three new ones in lizards. The hope is by identifying these molecules in lizards that they could then be used for human therapies.”

Hutchins said lizards are the closest related organisms to humans that can regrow structural body parts. She hopes the research helps with possible regeneration of cartilage in knees, spinal cord injuries and replacing lost muscle mass.