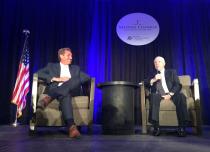 In an April recording released Thursday morning by Politico, Arizona Sen. John McCain is heard saying that Donald Trump at the top of the Republican ticket will make his own Senate re-election campaign more difficult because of Trump’s remarks that have offended Hispanics.

Still, at an Arizona Chamber of Commerce and Industry luncheon hours later, McCain stuck with his longtime position that he will support the Republican nominee — and would therefore support Trump.

“I will support the nominee of the party, both Jeff and I have said that all along,” McCain said, referring to Sen. Jeff Flake, who joined him on stage. “There is no doubt significant disagreements that I have with Mr. Trump. I will do everything I can to convince him on national security issues that he needs to do differently than he planned.”

At Thursday’s lunch, McCain said he did not believe the country could stand four more years of President Barack Obama’s national security policies, which is what he said he expects from Hillary Clinton.

When it was Flake’s turn to weigh in, he struck a different tone.

Flake stopped short of saying he would support Trump, despite McCain’s remark that both senators would.

“It will be very difficult for me to support Donald Trump if he doesn’t back down from some of the statements he made,” Flake said.

Flake named some of those statements as “applying a religious test for people to enter the country” and “reworking the First Amendment to go after folks, journalists who print unkind things about you.”

Also on Thursday, Republican Congressman Paul Ryan said he would not endorse Trump.

Earlier in the lunch McCain seemed to make a joke about Trump when he brought up the presidential election.

“It’s huge — we are going to make America great again, so don’t worry about anything,” McCain said. “It is going to be huge!”

In the recording released by Politico Thursday morning, McCain is heard speaking at an Arizona fundraiser in early April saying his re-election campaign “may be the race of my life” if Trump is at the top of the ticket.

“The Hispanic community is aroused and angry in a way that I have never seen,” McCain said. “So this is going to be a tough campaign for me.”