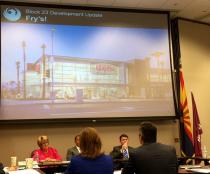 (Photo by Christina Estes - KJZZ)
Developers shared images with the Downtown, Aviation and Redevelopment Subcommittee that included a Ralph's store in Sherman Oaks, California, which he said closely resembles the plans for the Phoenix Fry's store.
RED Development
Full-service Fry's Food Store is expected between CityScape and Collier Center in downtown Phoenix.

Before construction can begin on grocery store, archeologists must get to work. That's just one of the new developments revealed during a meeting at Phoenix City Hall on Wednesday.

The Fry's grocery store is expected to anchor the intersection of 1st and Jefferson streets. Right now, it’s a big parking lot, but the area, referred to as "Block 23" used to be home to the Fox Theater and a JC Penney store. Beneath the store, they built a bomb shelter that must now be demolished, but first an archeological team will come in.

Jeff Moloznik with Red Development said they did the same thing a block away before building CityScape.

“We unearthed the highest concentration of pre-historic Hohokam pit houses on that site so who knows what’s in store," he said. "We also found a bank vault under CityScape, buried halfway under Washington Street and halfway under out site."

The excavation for the Fry’s store should begin later this year and they hope to open by late 2018. Moloznik said prices should be no higher than other Fry’s stores and shoppers will not have to pay for parking.

Moloznik shared images with the Downtown, Aviation and Redevelopment Subcommittee that included a Ralph's store in Sherman Oaks, California, which he said closely resembles the plans for the Phoenix Fry's store.

"What happens in this two-story glass cube is that customers are transitioning from the grade level esxperience where the merchandise is to the second level parking floor, so if you drive your vehicle into the store, park your car, you'll ride in one of two fully glass-enclosed elevators with your grocery cart to the merchandise floor, get your groceries, transition bak up and put your groceries in your car," Moloznik said. "You'll never leave your cart, you'll have it with you at all times."

Based on other markets, Moloznik told committee members that once the grocery store is open, they can expect a 7-percent increase in households over a 10-year period, from 3,800 to 6,400. He also said some markets have seen other grocery stores open following the initial store.

Plans for "Block 23" also include street level retail and a residential tower.