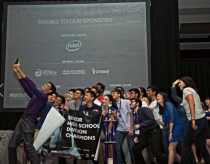 When the International Science and Engineering Fair (ISEF) visits Phoenix next week, you can expect much more advanced and complex projects than your local school science fair. With that complexity comes the need for expert science judges — and finding them is putting a strain on the host city.

A line of high school students forms outside the lower expo halls at the Phoenix Convention Center waiting to register for the Arizona Science and Engineering Fair. Clutching a tri-fold poster, Renee is with other students from the Center for Research in Engineering, Science and Technology, a STEM program at Paradise Valley High School.

“All we know is what we did at the North Valley Science and Engineering Fair, where we basically just talked to the judges about our project, and then they told us it won," said Renee. "So that’s how we qualified and here we are.”

Renee explained just what is on her poster.

“I did 'Functionally Significant Phosphorylation Sites of ATF 6,' so I’m seeing where, in cancer cells, a certain protein is phosphorylated and how that can change transcription,” she said.

Timothy Martin, a judge for 21 years, said advanced projects of this complexity are becoming the norm.

“In the past, most of them were homegrown, in the schools, a lot of home projects," Martin said. "Now that a lot of our schools have laboratory programs for research that are dedicated to it and then also the access to research laboratories like Barrow Neurological Institute, ASU, Biodesign, University of Arizona.”

And Renee is interning at a St. Joseph’s Hospital laboratory. While sometimes a challenge to judge, Martin said he and others relish the chance to assess the projects.

“It’s very encouraging that we have some very bright students that could be the next Steve Jobs," said Martin. "And also the International Science and Engineering Fair will be here in May, and we are in need of a lot of judges and a lot of volunteers.”

They're looking for about 100 more judges. For senior level judging, like Renee’s project, ISEF requires a doctorate or many years of experience in a given field. ISEF is the largest pre-college science fair in the world, hosting 1,700 students from over 75 countries, meaning Phoenix is set to become the center of the science fair universe.

“The biggest challenge has always been trying to find the number of judges that can judge these projects because they’re such a high level of science and engineering," said Lorna Glaunsinger, an ISEF judging co-chair. "Even starting out in 2005 where we only needed about 700 judges, and now we need well over 1,000.”

About 60 percent of current judges are from Arizona and the rest coming from 38 other states and eight different countries. They are as diverse in their specialties as they are geography.

“We need judges in 22 different categories," said Lorna Glaunsinger. "They range from engineering to biological sciences. We have some new categories, chemical energy, we are working hard to get judges in the solar fields. We have not been as successful as we wanted.”

William Glaunsinger, Lorna’s husband, is the other judging co-chair and said they need to get all the judges they can because there is a lot at stake.

“The judges alone are responsible for choosing the winners at the fair," said William Glaunsinger. "A very large number of winners, about 25 percent of projects, will get awards. The awards range from up to $75,000 in cash down to fourth place award, which is $500 in cash.”

On judging day, there’s a morning and afternoon interview session with project groups.

“There’s a new digital scoring system which will display the rankings and then the judges go back and forth with how good these projects really are and interview those students who appear to be top candidates,” said William Glaunsinger.

Beyond interviewing students, William Glaunsinger said volunteering also serves as a networking event for distant colleagues and may even spur new entrepreneurial ideas. Even though Phoenix is slotted to host again in 2019, he said weak community support may lose that.

“I’ve been judging for the grand awards for now 15 years, this is probably the most difficult year we’re going to have," said Martin. "The quality is outstanding, and we have to eliminate a few of them, and that’s going to be difficult.”

After standing on a concrete floor for eight hours explaining "Functionally Significant Phosphorylation Sites of ATF 6" to numerous judges, Renee's project was eventually not chosen for ISEF. However, she said the the experienced judges helped her learn from her work.

“Their questions really make you think about the process of how you did it, because they’re interested in the result, but they’re way more interested in how you got there," Renee said. "So, it’s something I’m going to have to think about more in the future rather than just getting the data, which is something I just was not thinking about, but now I will be.”

The last day to register as a judge or volunteer is May 6, 2016, at 5:00 p.m. The public is invited to view projects May 12 at the Phoenix Convention Center.

To register as a judge or volunteer, visit https://apps2.societyforscience.org/Judging/Account/CreateAccount.