University Of Phoenix Shareholders Get 'Best And Final Offer' 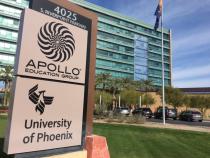 A consortium of private investors have laid out their "best and final offer" to buy the parent company of the University of Phoenix.

In a news release Greg Capelli, CEO of Apollo Education group, said, "The board believes that the increased offer clearly makes this transaction an excellent outcome for shareholders, particularly given the headwinds facing the company.

The offer, which came over the weekend, is for $10 dollars per share — 50 cents higher than the previous offer. If approved, the deal would be worth $1.14 billion.

During last week’s shareholder meeting, Apollo reported nearly 58 percent of investors who voted supported the sale at $9.50 per share. But sealing the deal requires the majority approval of all outstanding shares and Apollo said not enough investors had voted.  A second vote is scheduled for this Friday.

Shareholders have filed a lawsuit against Apollo Education alleging the company failed to protect their interests. The company denies those claims.

The consortium of investors that presented its "best and final offer" include The Vistria Group, LLC, funds affiliated with Apollo Global Management, LLC and the Najafi Companies.

Earlier this year, Capelli told KJZZ that going forward the University of Phoenix would be judged by graduation rates and successful job placements, not its enrollment size.