Future Thinking: ASU Considers How Sports Will Play Out Over The Next 2 Decades 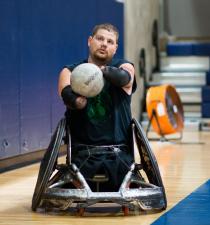 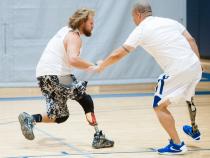 You might think of it as the World’s Fair of athletics right here in Tempe.

But some of the players at Emerge, the Future of Sport 2040, aren’t your typical athletes.

You could call them cyber athletes. Or then again, maybe not.

“I’m not sure they’d like that,” laughs Ryan Scott, an Arizona State University grad and owner of Endgame, a sports bar in Tempe for online gamers who’d rather be interactive than reactive.

“It’s one thing to play the Super Bowl. But then it’s another to have those people actually come and play in your bar,” Scott explains. “You don’t need a football stadium to play it in, all you need are the things that we provide here.”

"E-Sport" is serious business on ASU's campus, where a team of six e-gamers recently won a national title in a competition known as Heroes of the Dorm, collecting $30,000 in scholarship money as a reward.

The Sun Devil squad of virtual athletes will be on hand to showcase their cyber skills and knowledge at Friday’s free Emerge event at Wells Fargo Arena, from 5 to 10 p.m.

Hyman, 37, was raised in Mesa and started swimming because she was an asthmatic. She took medication and as a result could swim as a child. But she admits, “In some ways I was enhanced because I had medicine that made me healthy enough to swim.”

That has her wondering how performance enhancers could factor into the future of the sport. “Especially in swimming, something that has always been an issue has been steroids,” Hyman said.

“Where do you draw the line with whether it’s physical enhancements through drugs, or through your bathing suit, or what things you allow and what things you don’t?" she asked. "That’s always been an issue in sport. I mean, you think about what Mark Spitz had when he swam, he didn’t even have goggles.” (Spitz won seven gold medals for swimming in the 1972 Olympics.)

Hyman, who won a gold medal of her own, for the 200-meter butterfly at the 2000 Summer Games in Sydney, believes there are all sorts of possibilities.

While Emerge 2016 may not have all the answers, it will be raising plenty of questions like that during the festival.

Cyndi Coon is producing the event for ASU. “We’re saying maybe athletes do go away, and it becomes robot soccer,” she said. “Or maybe it goes the other way, and we get rid of all technology and we go back to just athletics.”

Emerge is in its sixth year and is the brainchild of Joel Garreau, a professor at ASU's Sandra Day O'Connor College of Law. “This is really about the future of what it means to be human. That’s what Emerge really cares about,” he said. “What we’re interested in is that sport is as ancient as it gets as a maker of what it is to be human.”

Garreau said the athletes on hand for the event will represent a range of abilities on the athletic spectrum, including players with disabilties. Parathletes will participate in wheelchair rugby, and the latest prosthetics will be on display on the basketball court.

There will also be a special edition of the Arizona Storytellers series featuring some of the area’s top athletes discussing the future of sport. Admission is free, but you must registered first online at emerge.asu.edu.

Video courtesy of ASU School for the Future of Innovation in Society.