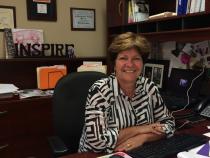 (Photo by Casey Kuhn - KJZZ)
Kris Jacober is a foster parent and director of the Arizona Friends of Foster Children Foundation. 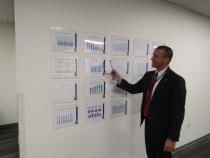 (Photo by Casey Kuhn - KJZZ)
James Molina stands in what used to be his own house before he turned it into a group home for foster children in Peoria, Arizona.

(Photo by Casey Kuhn - KJZZ)
James Molina with Step Up Arizona works on paperwork with Jose Gonzales and another group home provider in Peoria.

There are almost 19,000 kids in out-of-home care in Arizona and that number is growing. Meanwhile, state rules are changing to give caretakers more freedom in raising their foster children.

The conversation at the group home in Peoria run by James Molina turns to who is going to take Fernando to the hospital. Fernando a foster kid living there and took a trip to Tucson for the Future Business Leaders of America state competition over the weekend. Trying to impress a girl, he bench pressed his buddy— and is really feeling it now.

“We’re going to the doctor in the next half hour,” his staff says as Molina walks in the door. They didn't need to ask permission for him to receive medical care. And Fernando only needed their permission to go on the three-day trip in the first place.

This freedom is something Fernando savors. He's been in foster care on and off around the Southwest since he was 4 years old.

"I like it," he said of his current situation. "I get to have a pet, and there's more freedom, as long as I'm doing good in school."

In the future, he wants to start a counseling business or open group homes like Molina's, and plans on going to Arizona State University next year. Right now though, he has the luxury of thinking about "normal" teenage concerns-- like how to get a tux for the prom.

Historically, children like Fernando weren't allowed to leave the group home without express permission from a caseworker or the court. Under new training requirements, Molina's staff will have the power to make those decisions.

"To be honest, I don't think there's going to be much that will change other than saying 'Hey we don't necessarily need to get the DCS case managers [involved],'" Molina said. "I made it clear to my staff that we needed an email from every case manager saying that it was OK. We're not going to have to do that anymore."

The new training stems from a 2014 federal policy known as "Reasonable and Prudent Parenting", which gives guardians more power, rather than the state, to make decisions for their foster children.

But getting that information to the foster parents had some stops and starts.

Department of Child Safety Director Greg McKay said communication between caseworkers and foster parents is going to be reviewed by the department as the training comes out. And, he admits DCS has seen obstacles.

"There was a bit of a breakdown between rule and execution and application and understanding," he said. "In the fall, there was need for new rule-making authority. There was public comment and eventually the rules were about done and we started to hear a lot of complaints about what those rules shaped up as. We stopped the process and brought back the stakeholders to hear what they think the rules should reflect."

Step Up Arizona group home staff member José Gonzales said it’s about time foster children get treated like everyone else. At 22 years old, he just aged out of the foster care system a year ago. Originally, he left the group home at 18, but after having trouble getting his feet on the ground with a newborn child, he opted to go back into the system until the maximum age of 21. Gonzales wants to see the kids he works with now have a better life than he did.

"When I was in a group home, you weren’t really allowed to go out and have friends or have people come over, and make phone calls to people that weren’t on your approved list," he said.

He said he got used to coming home, sitting on the couch and watching TV but felt unprepared when he was let out in the real world.

Step Up director James Molina is looking forward to the new standards, but he’s heard concerns from other, larger group homes.

"Risk was brought up. Documentation, documenting everything we’re doing," he said, after correspondence with other group home providers. "It was brought up there's going to be staffing issues dropping off kids. There were questions about whether the insurance rates would increase. A concern regarding the social media, the Facebook, the internet part."

Marnie Green, the director of 22 shelters and group homes at Family Support Resources in north Phoenix, sees some potential struggles in homes that all parents deal with — like policing cellphones.

"Now they’re saying that kids 12 and up or any kiddos could come in with a cellphone," she said. "Obviously we need to come up with a better system in the homes how to figure it out, but it is a lot more work to monitor all those kids' phones."

Foster parents have to get trained by June 1, but DCS officials say that’s just a goal to meet.

"I think it’s wonderful," said Kris Jacober, a foster parent and the director of Arizona Friends of Foster Children Foundation. "If you sit through the training you would say this is common sense but it hasn’t been common sense for foster families."

She said as licensing agencies are separate from the department, they typically take it upon themselves to make sure training gets done.

"Licensing agencies think 'Well how will I get my families to do this?'" she said. "There’s a lot of gray, always, with what you have to do and why you have to do it. So I said, they put a hoop I jump through it. I want to keep my license."

But ultimately, Jacober said she just wants to be more like a real parent to her foster child, and even with the delays and rush to implement the new rules, this training lets her do just that.

Editor's Note: The third paragraph has been modified to reflect it was James Molina who walked through the door.