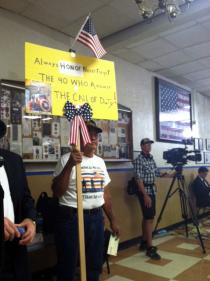 The controversy over the VA Medical Center in Phoenix is continuing over allegations of delays in patient care that led to at least 40 deaths.

The American Legion hosted a town hall in Phoenix on Tuesday night to give veterans and their families the opportunity to express their concerns.

We talked to Verna Jones, the American Legion’s Director of Veteran Services and Rehabilitation, about what needs to be done next.