Scientists Test Wasp In Arizona As A Tool Against Citrus Greening 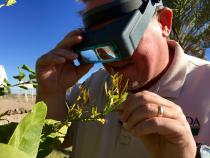 (Photo by Amanda Solliday - KAWC)
Bobby Baker, a technician with the U.S. Department of Agriculture, looks for the Asian citrus psyllid on a lemon tree in Yuma County.

The plant disease citrus greening has hit Florida hard. Growers in other citrus-producing states, like Arizona, see it as a warning.

Researchers in San Luis are collecting new data on a wasp that may help slow the spread of the disease.

The parasitic wasp Tamarixia radiata is so small, scientists can ship 200 of them in a vial about the size of a photo film canister.

Bobby Baker, a technician with the U.S. Department of Agriculture (USDA), has received weekly shipments of the vials for more than a year.

“They arrive in a cooler, and they’re chilled,” Baker said. “There’s a little ice pack in there to keep them chilled, so it keeps them dormant.”

The insects come from Pakistan. They were reared in a University of California-Riverside laboratory and sent to Baker. He and an Arizona Department of Agriculture inspector release the wasps at sites in Yuma and Mohave County.

The wasp is a predator of the Asian citrus psyllid. The psyllid can carry in its gut the bacteria that cause greening disease.

“And fortunately, we’re lucky because here in Yuma, in Yuma County, in Arizona, we have not found the disease yet,” Baker said.

The Asian citrus psyllid resides in parts of Arizona, but not the disease. Citrus quarantines are in place in seven Arizona counties to prevent the spread of the insect.

Greening has been found just next door in residential trees in California.

Greg Simmons, a USDA entomologist, is the project leader tasked to find biological control agents for the Asian citrus psyllid in California and Arizona.

“It’s a field of biocontrol that we call classical biocontrol, where we try to establish a new agent in the environment and sort of reunite a natural enemy with its pest species that it has evolved to attack,” Simmons said.

Tamarixia only attacks the Asian citrus psyllid, something known as host-specificity.

A parasitic wasp finds a host and lays eggs inside its body. Later the eggs hatch, and new wasps emerge and kill the host as they exit.

The goal is the wasps will remain in the environment, as long as the Asian citrus psyllid is around. The Arizona Department of Agriculture and USDA are monitoring the entire state to find psyllids and respond to any new infestations.

Simmons added the pest can reproduce well in spring and fall, and in cooler microclimates. This means the insect still poses a risk to the citrus industry and backyard citrus in Arizona.

The experimental trees for the trials in Yuma County are all located in residential areas. Baker contacted each homeowner personally to see if they would to help with the research.

It’s spring, and the new tree growth is attractive to the psyllid.

“This would be an ideal place for them, right here,” Baker said. “This new growth is like perfect territory for them.”

We see feeding damage but no psyllids. Baker said the newly-introduced Tamarixia can spot their prey better than we can.

And the wasps have already established populations at a few of the Arizona sites.