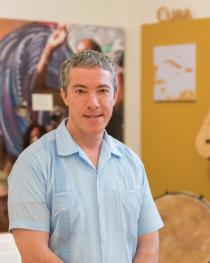 (Photo courtesy of Daniel Piper)
Daniel Piper is curator for Latin America and the Caribbean at the Musical Instrument Museum in Phoenix.

There’s been a lot of talk about political exchanges, but cultural ones are starting to happen as well. The Musical Instrument Museum in Phoenix is taking part - MIM is expanding its Cuba exhibit.

Daniel Piper, curator for Latin America and the Caribbean. spoke about the addition.