Yarnell Daze: 1 Year After The Fire 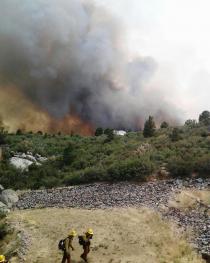 The Yarnell Hill Fire last June left about a third of the town's residents without a place to live. Rebuilding efforts are still ongoing, but that won’t stop Yarnell from celebrating this weekend.

It’s time for Yarnell Daze, the annual festival the town holds each year in May. This year’s festival will be familiar – ice cream, a parade, live music - but also different.

Chair of Yarnell Daze Jerry Florman said the focus this year is on celebrating the volunteers and workers who have helped rebuild the community after the fire. "So we have invited as many of them as we can contact to come back to Yarnell to march in the parade."

She said organizers are expecting a huge crowd, bigger than Yarnell Daze has ever had. The town is less than 10 square miles in size. But the fire put it on the map and in the media.

President of the Yarnell-Peeples Valley Chamber of Commerce, and Chair of the Yarnell Hill Recovery Group Steering Committee, Chuck Tidey, said the festival will give outsiders a look at how far Yarnell has come in almost a year. The fire destroyed more than 120 homes and residents evacuated for 10 days. "About 200 of our residents came back to nothing but ashes," Tidey said.

Since then the recovery group has worked to raise money and rebuild. It started with 10 uninsured homes, all of which have been rebuilt. The plan is to finish 30 under-insured homes by the end of the year.

In some ways the town isn’t re-building, it’s building something totally new. The town will soon have a doctor’s office and hopefully a bank - things it didn’t have before the fire.

But there’s still a long way to go, Florman said. "As people who have suffered a severe trauma in the past year, they’re still processing and dealing with trauma. It’s not done yet."