Phoenix Warehouse District Gets A Makeover While Preserving Its Original Look 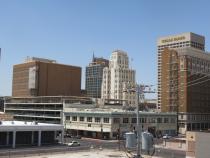 Sarah Ventre KJZZ News
The view from the roof of the Phoenix Merchandise Mart. 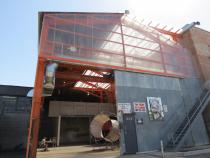 Not far from the sporty, artsy, touristy urban core is a concentration of old buildings that is known as the Warehouse District. Most of the buildings here are exactly what you’d expect. They are big empty boxes with exposed beams and columns and have that distinct smell of heat mixed with old wood and machinery. This area was once at the center of Phoenix commerce, home to thriving manufacturing, retail businesses and grocery stores. Now, after years of disuse and blight, the neighborhood is a shell of its former self. But there are some who believe the Warehouse District can be restored. Local developer Michael Levine owns several buildings and businesses here.

Levine differs from many developers because he is so deeply invested in preservation. According to Levine, “You have to save every building no matter how ugly it is.”

Director of the non-profit Preserve Phoenix, Jennifer Boucek said she feels a special connection to these rough-around-the-edges industrial spaces. “I think for anyone who walks into this area, you can feel the difference immediately. The mass and the texture and the character of the buildings is like nowhere else in Phoenix. And Phoenix needs that sense of history and character to give it a more urban feel.”

In fact, this area and the neighborhoods surrounding it have historically been Latino barrios. So it’s easy to see the new redevelopment as gentrification. While there are almost no residential buildings in the Warehouse District, the changes happening there are attracting young people with some disposable income, which could put the history of the neighborhood’s culture at risk. But bringing fresh ideas and activity to the area is something Levine thrives on. His more well-known projects include the building that is now The Duce (a restaurant and boxing gym) and Levine Machine (an art studio and gallery). I went with him to one of his buildings near 1st Street and Madison.

“The space we’re in is the 1946 Phoenix Merchandise Mart. It was like an early version of a Best Buy, where you’d come and see the couches or the TVs and then you would be able to order it and/or take
it with you right then and there,” Levine said. The first floor of this building has a corrugated steel roof. The I-beams are exposed and plaster is peeling off the walls. But Levine sees new possibility.
“My plans for the Phoenix Merchandise Mart are my plans that I had for all my other buildings. Strip it down to its bare bones, get a good electrical service in it, get the restrooms in it and then its Kevin Costner: build it and they’ll come.”

For Levine and Boucek, the name of the game is adaptive reuse. That means taking old buildings, renovating them and finding new uses, rather than demolishing them and building new ones.

“When I can find out who lived and breathed and cried and died in these buildings…it inspires you to work that much harder for those people, and it also can inform architecturally how you walk through the buildings and how you experience the buildings,” Levine said.

He also said that it’s actually cheaper to renovate, but it's not easier. He’s found all sorts of disgusting things while renovating, including pigeon skeletons and packs of beer that are a decade old. Still, Levine insists that it’s necessary to preserve what’s left of the historic and urban feel. “Everyone else still has their typical business thing. Like, ‘Well, you have to break a couple eggs to make an omelet.’ There [are] no more eggs to be broken. You need all the continuity and connectivity that is existing to keep it moving forward.”

There are 27 buildings in the area listed on the historic registry, though there are many more that Levine and Preserve Phoenix see as valuable. Jennifer Boucek is constantly keeping track of potential demolitions of these old buildings.

Boucek said, “We try to see what we can do to step in and prevent any irreparable harm to those structures.”

The thing most everyone can agree on is reviving the area. It’s just a question of how.