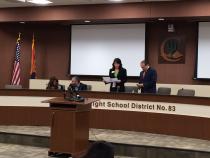 (Photo by Casey Kuhn - KJZZ)
Arizona Secretary of State Michele Reagan prepares for a public hearing about the election problems in Maryvale.

Frustration was the word of the night as dozens of Maricopa County residents came to express their feelings on the Arizona Presidential Preference election last month where voters stood in line for hours as the number of polling places were reduced but open to anyone.

“Voters were very upset because they had so many voting places before and that went down to one," she said. "We didn’t see that in all parts of the Valley.”

The meetings, Reagan says, are a way to get detailed stories of the problems voters faced, most of which were long lines. Others faced technical problems with mail-in ballots and confusion about where their polling place would be.

Ted Montijo lives in Maryvale, and told Reagan he didn’t vote because of the long lines.

“And I feel like we’ve all been denied that opportunity to make this community better among us and the reason we’re here tonight, again, is to communicate,” Montijo said.

Reagan will host two more public meetings this week, one Wednesday in north Phoenix and Thursday in Gilbert.

Maricopa County Recorder's office did announce there will be 116 polling places for next month's special election, up from 62 for the presidential preference.