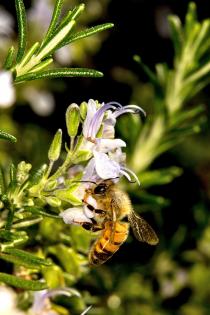 (Photo by Andrew Bernier - KJZZ)
Dozens of beehives are kept for experimentation, testing and teaching beekeeping at ASU's Bee Lab in Mesa. The bees are Italian honey bees, a subspecies of western honey bees.

Bee colony populations have dropped more than half during the last decade but are slowly making a comeback. While scientists are not exactly sure what is causing this decline, Arizona researchers are pushing the limits of baby bees to see if it makes them stronger adults.

While scientists have narrowed possible factors to pesticides, parasites and malnutrition among others, ASU professor Robert Page refers to the decline of bee populations as “death by a thousand tiny cuts.”

Page said bees need different types of pollen to create different proteins. But with agriculture often focusing on one plant, bees can be starved of different amino acids needed to create protein.

“We’re subjecting bees to our practices to get them to work for us and give us the products we want," said Page. "But in doing so we’re really damaging their ability to survive. We’ve changed the environment they operate in in a way that isn’t really supporting their needs. And then we scratch our heads and wonder why they’re dying.”

At ASU’s Bee Lab, researcher Ying Wang is testing malnutrition effects by starving bees as larvae and again as adults. She and a team recently published two papers on the resiliency of bees in light of food shortage by measuring behavior, physiology and hormone regulation. The first paper suggests bees starved as larvae develop different adaptive responses compared to adult bees not starved as larvae.

“They can regulate their food their food resources," Wang said. "For example, if there is a lack of pollen in the environment, the colony will send more foragers out to collect pollen. And if the situation is getting worse, the queen will stop laying eggs.

The second paper suggests bees improved metabolism by using sugar and fats more efficiently, but Wang said her team is not quite sure what allowed the bees to do that.

"The malnutrition did affect the adult bee at some level," Wang said. "But we don’t know what kind of level it will affect. I want to understand the mechanism behind that."

Wang said by identifying that mechanism in bees, it may help explain the association between developmental malnutrition in another social species — humans — and their risk for later metabolic disorders like diabetes, obesity and heart disease.