A Beer Can In Arizona Leaves The State To Be Recycled 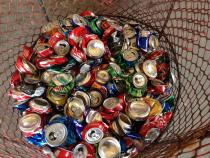 Alexandra Olgin KJZZ News
Aluminum beverage cans are collected in Phoenix to be recycled in California. 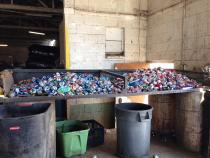 Alexandra Olgin KJZZ News
Aluminum beverage cans on the tables are to be sorted and prepped to be shipped out of Arizona. 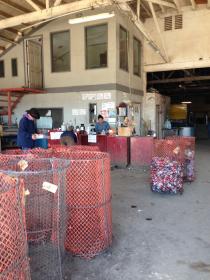 The city of Phoenix crushes the aluminum cans dropped into residential blue bins, and then sends them as far away as Alabama to be recycled. Private recyclers ship the metal out of state, too.

But the business of exporting aluminum can be a problem for states that offer refunds for the cans.

Workers at C’s Recycling in Phoenix unload wire bins of empty aluminum cans, sort them at a table and then toss the load into a hopper. Owner Cesar Castenada said he got those cans from local collectors looking for a little extra money. After the aluminum goes through the hopper, his workers load 60-pound bags onto semi-trucks. “And we sell them in California,” said Castaneda.

He sells about 5,000 pounds of aluminum a week to private recycling yards out-of-state. "We, as a scrap yard, sell to another scrap yard," He explained. "We don’t know what they do with their cans. But obviously they sell that as CRV.”

CRV is California Redemption Value. When a can is purchased in California, a five-cent deposit is paid to the state. When the can is recycled, the person gets that money back. Next time you drink a beer, take a look at your drink. You’ll see the 10 states with this deposit system printed on the top of the can.

The problem, according to California Democratic Assemblyman Rich Gordon, is that this opens to the door to recycling fraud when a refund is paid for out-of-state cans. "If you are a state who has a redemption program, you can be stuck on this,” Gordon said.

He wants to hold both the buyers and sellers of these cans accountable. “We would be able to fine an individual who brings material in and knows that it’s from some other place and we would be able to have some penalty against recycling center,” said Gordon.

This is a big problem for California. Gordon estimated the state pays out nearly $40 million each year for cans that were recycled in California but never purchased there. The California Department of Justice arrested 54 people for recycling fraud in 2012 and 2013. Gordon is sponsoring a bill that would lower the amount of cans a person can recycle at one time. It would also allow the state’s recycling program to suspend or shut down companies illegally buying out-of-state aluminum.

“The difficulty is there is nothing illegal about transporting the material,” said Mark Oldfield, a spokesman for California’s recycling program, CalRecycle. He said because it’s technically legal to bring the metal across state lines, fraud is hard to stop. “That is an interstate-commerce issue. There is nothing we can do to stop people from transporting it. It is only illegal when they take it to a recycling center and claim California redemption value for it."

Doing so could result in fines and up to a year in jail in California.

Back at C’s Recycling, owner Cesar Castaneda watched as his workers scurried around the warehouse with bags of aluminum cans slung over their shoulders. Castenada said even though his business hurts California it helps Arizonans. “A lot of families that recycle their cans, they make good money,” he said.

And this whole issue of exporting aluminum brings up another question. Is it even worth recycling your can, if it’s put on a carbon-polluting truck and shipped out of the state? The answer is yes. The process of making a new can produces 20 times more emissions than recycling one, according to sustainability experts.