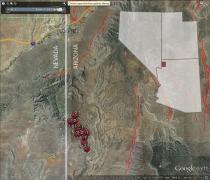 (Photo courtesy of Arizona Geological Survey)
The location of the 19 events in northwestern Arizona; red circles with magnitudes of each event; red lines show location of known, active faults.

Earthquakes typically have one significant event and a few aftershocks, but are not often felt in Arizona. Over the last week, however, 19 earthquakes trembled the far northwestern corner of the state.

About 23 miles south of Littlefield, Arizona, which is located along Interstate 15, lies the Mesquite/Overton and Grand Wash fault lines. During the course of a week, the 19 earthquakes had magnitudes ranging from 0.7 to 2.8 and trended in a northwest direction, as reported by the Arizona Geological Survey.

Seismometers had difficulty measuring the depth of the earthquakes, ranging from 0.0 to 8.6 miles deep, because of how remote and rugged the terrain is and the small magnitude of the tremors.

The seismic events started on March 29 and ended — so far — on April 4.