As Prescott's Rehab Industry Grows, So Do Concerns 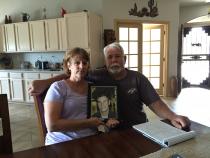 (Photo by Will Stone - KJZZ)
Jill and Glenn Martin's son died in a group home after struggling for years with addiction. They now live in Prescott, which has become a national destination for those trying to get sober.

Like so many parents, Jill and Glenn Martin never imagined their son might fall down the abyss of prescription pills.

“He played baseball a lot, and he was into school and girls and just everything a regular teenager would be,” recalls Glenn Martin. He and his wife sit in their living room at their home in Prescott, Arizona.

“He was like the boy next door — always smiling, always happy,” he said.

A family photo shows an ebullient young man in his graduation cap.

“That was Joey’s high school graduation. This was maybe a year after the accident,” Jill Martin said.

That head-on collision with a drunk driver left Joey in pain. Soon he was using pain medication and eventually abusing it, despite his parents’ best efforts.

“When your kid is addicted, you do whatever you can to help him, and that’s what we did,” Glenn Martin said..

For three years, their son was in and out of different programs and group homes for recovering addicts, finally ending up at one in Southern California. They had been referred by a well-known hospital, Loma Linda University Medical Center, and his parents were hopeful. Joey was talking about going to college.

Then they got a phone call. Joey was found dead in his room at the group home. He had overdosed.

Later, they learned he had shown up the evening of his death to a house meeting looking sickly, “white as a ghost.”

“If you have overdose training, then you test, or you do what’s necessary. You do what you can. You call 911,” Jill Martin said. “You don’t just send the person to bed to die.”

Turns out Joey had not been drug tested for 45 days.

"These people that live in these sober homes. They deserve the safety element just as much anybody else. They don’t know. The parents don’t know. We didn’t know,” Glenn Martin said.

“If we had known, we would never have let him stay there,” he said.

After his death, the couple moved to the quiet mountain town of Prescott — a community that, ironically, has become a national hub for this booming area of the rehab industry: sober living homes.

These group homes are generally easy to start, cheap to run and, in states such as Arizona, largely unregulated, other than some city zoning and code enforcement. They tend to be affiliated with outpatient medical treatment centers that are licensed by the state and accept insurance. This setup — separating the residential homes from the regulated treatment component — is known as the "Florida model."

At last count, Prescott had more than 150 of them. As the numbers have multiplied, so, too, have concerns.

Back in 2007, before the proliferation of these sober homes, Dwyer was brought to Prescott from Lake Havasu to give up drinking and get sober.

But that went awry when she was kicked out of the program.

“A big white van came and got me and they told me I could be driven five miles from the center of the town square,” Dwyer said. “I told them I don’t have money, I don’t know anybody in Prescott.”

She was removed from her recovery program because of an argument and, she suspects, because she could no longer pay.  Dwyer is now sober and still lives in Prescott.

She still sees young people walking the streets of Prescott, suitcases in hand.

“I’m 99 percent certain that is someone who has been recently kicked out of a recovery home. With no plane ticket home, no exit plan,” Dwyer said. “The responsibility is on the people who brought them here. I’m not saying they’re innocent victims, but what other option do they have?”

Dwyer has worked in the industry and has some close friends who have opened homes, some of which are very well run, she said.

But there’s also a dark side of the industry — one that still persists.

Vincent Rienzie Jr. came to Prescott from Long Island, N.Y., where he struggled with heroin addiction.

After about 60 days of sobriety, he and a friend were recently kicked out of a Prescott program called Promise Recovery.

Just this week, sitting on a plane bound for New York, he explained that he was removed after socializing with women, which is against the rules.

“Our insurance wasn’t paying them and so they were looking to make an excuse to throw us out,” Rienzie said.

He said he had already been told that his insurance was not paying anymore, and the program was doing him a “favor” by keeping him there. Soon after, he and his friend were out on the street.

“Literally the words that were spoken to us from the director of housing was: ‘We are throwing you out. I said tell me why? He said, ‘I really don’t need to give you a reason. I’m just not dealing with you anymore,’” Rienzie said.

Rienzie said other people in the program had been caught getting high, but were allowed to stay because they were still paying.

Barry Hancock was a therapist at Promise Recovery until recently. He was fired shortly after trying to help Rienzie find a place to stay.

He says Rienzie's story of the recovery industry in Prescott is true.

The Promise Recovery program has not responded yet to a request for comment.

Hancock estimates you can open a program and have 20 to 30 clients within a month.

He said not that long before this incident with Rienzie he had been told a lot of the clients did not have insurance and the program would have to figure something out, or start finding ways to tease people out.

“Insurance (payments) come into these rehabs and people make a lot of money,” said Hancock, adding that often a program won’t reap the benefits of that for several months. “So it makes it very easy to cut your losses and just have them leave."

While it is difficult to nail down exact numbers, sources inside the insurance industry say out-of-network providers can typically bill from $500 to $800 a day for intensive outpatient treatment.

They are generally run by people in recovery themselves, some with less than a year of sobriety.

“People will fall off the wagon while they own a group home. Some fairly huge companies have had big failure that way,” Hancock said.

Hancock said many programs do not keep reliable data on their success rates, but even the best ones are only about 15 percent effective. He believes many people do have a heart to be in the business. Still, he said that does not mean they should not be liable for the outcomes and what goes on in the homes.

“I don’t think they can regulate themselves. It is that chaos. We have just people coming in and opening rehabs and…. we have chaos,” Hancock said.

A review of complaints made to the state — obtained by KJZZ through public records request — against some of the major treatment programs in Prescott as well as extensive personal interviews speak to these systemic issues: Recovering addicts enter programs, often without discharge plans. Many will bounce around to three, six or more programs. Sometimes clients are kicked out, allegedly because insurance runs out.

“The drive to make money sometimes gets to be a greater motivator than the drive for patient safety and clinical care,” said Gerald Shulman, a therapist based in Florida with more than 50 years of experience in the field and an expert for the American Society of Addiction Medicine.

Shulman said the growth of these kinds of programs in recent years has been near “astronomical,” in part because the barriers to starting a home are minimal.

Insurance companies are also seeking out less restrictive models of treatment care than inpatient settings. But the lack of accountability is plaguing certain areas of the industry, Shulman said, especially sober homes that are part of the "Florida model."

That can lead to a range of ethical practices, from well-structured programs to ones runs by people who see it as a “get rich scheme.”

“I have seen good programs where they have more clinically sophisticated people in charge of the group homes. They report to the treatment programs about what goes on at the home, that can be fodder for group therapy,” Shulman said.

But “there are some fairly shoddy things going on not infrequently,” he said.

For example, Shulman said in south Florida it is common knowledge there are programs that permit drug use — or even encourage it — so they could readmit the patient for another period of treatment.

He believes the residential settings — the group homes — should be regulated, even though they are separate from the actual medical treatment, particularly because the premise of this business model is the relationship between the two components.

“I’d also like to say there are people in recovery who really want to give something back because of their own recovery and that’s what might motivate them,” Shulman said.

You hear this from many in Prescott. They want to do right and help others, but undue regulation could hamper that, they argue.

Still, as calls for more oversight in Prescott and at the state capitol get louder, that position will be put to the test.