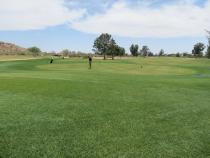 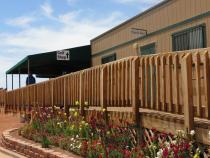 (Photo by Annika Cline - KJZZ)
This clubhouse at Papago Golf Course was meant to be temporary. The partnership with ASU would have the university build a new clubhouse within three years.

The city-owned Papago Golf Course in Phoenix lost money for years until a change in management in 2011. Revenue has increased since then, but remodeling was never finished. A proposed agreement with Arizona State University might get the course the green it needs.

On Wednesday the Phoenix City Council will vote on the agreement that would have ASU manage the course through the creation of a nonprofit golf foundation. This means the city would still own Papago, but ASU would operate it and pay rent to the city — $200,000 annually to start.

It also means the golfers who currently play at ASU’s Karsten Course will be relocating after the university closes that course.

"The university’s mens’ and ladies’ golf program will have access to the course for practices after 3 p.m. in the afternoon, but the rest of the time the facility will be available to the public just as it always has been for the last 50 years," Harman said.

Resident cardholders would have access to about 50 percent of all rounds at Papago. Since the city of Phoenix will still own the course, fees and club card rates will stay the same.

This is good news for Chuck Casillas, who comes to the driving range almost every day. As a regular for years, Casillas said he has seen improvements to the course. But then he pointed to the clubhouse.

"It’s a double-wide trailer. It’s in better shape than it used to be 5, 10 years ago but it still needs a lot of work," Casillas said.

A new clubhouse was started back in 2008, but the managing company at the time failed to complete it. Harman said this is a major reason for the agreement with ASU. The university would be required to construct a new clubhouse within three years. Plans for a new access road and parking are also in the works.