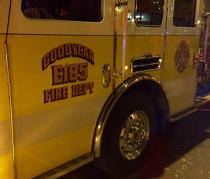 The crew has a set an extra place at the table for Dr. Jeremy Maggin. He’s visiting from the East Coast, and hopes to go with them on the “Holy Grail” of calls: a cardiac arrest.

“You hope nobody has cardiac arrest while you’re there because you don’t want anybody to get hurt,” said Maggin. “But that is where EMS has the biggest role in terms of saving somebody’s life.”

Goodyear has one of the smaller fire departments in the Valley, but it’s the only agency a doctor spent the week embedded with. Maggin is here as part of a year-long fellowship in disaster medicine through Boston’s Beth Israel Deaconess Medical Center and the Harvard Humanitarian Initiative.

Goodyear is just the latest stop for Maggin in the fellowship. He’s also gone to Times Square for New Year’s and met with the White House medical staff. He plans to eventually start a practice in California, but also wants to help with planning for how to respond to a national disaster.

Maggin will ride with Fire Capt. Bryon Mabery’s crew to observe how they practice emergency medicine. Goodyear is unique because it puts two paramedics on every truck, equipped with advanced equipment to diagnose and treat patients in the field.

“As you go East in the United States, it’s a whole different way they do EMS out in the field,” Mabery said. “We have a totally different model than anybody else in the country."

After dinner, it looks like it might be a quiet night in the southwest Valley. So the crew hops in the fire truck and takes Maggin to Goodyear Ballpark where the Brewers are playing the Reds.

Maggin likes being the doctor on call at pro sporting events. So if it’s going to be slow, this seems like a good way to pass some time.

But shortly after he shakes hands with firefighters and paramedics working the game, a call comes on the radio. There’s a mobile home on fire in neighboring Avondale.

When the crew gets to the scene, they fight the blaze alongside firefighters from other departments. That’s because of the automatic aid system-- an agreement by Valley fire agencies that regardless of city boundaries, the closest units always responds to an incident.

Automatic aid is like having one big agency covering everything from Gilbert to Buckeye, according to Goodyear Fire Chief Paul Luizzi.

“If you combined all of our fire stations together, which are over a hundred, we would be the second largest fire department behind the city of New York,” Luizzi said.

Seeing how this one-of-a-kind system works is important for Maggin. To save lives after a disaster, he’ll have to find a way to maximize any resources he can find.

“For an event to go off as best that it can, because in a disaster you can’t say that it’s going off ideally, you really need to be able to cooperate with everybody and pitch in together,” Maggin said.

Work remains steady after the crew and Maggin leave Avondale. They go to another fire, and help an elderly man who fell at home.

It’s after 1 a.m. on the East Coast and Maggin is exhausted. But then, the crew gets called to a serious car accident.

The injuries are not life-threatening. But the driver has to go to the hospital. Having been at the scene gives Maggin clues about the patient’s wounds which might not be immediately obvious to doctors inside the emergency room.

“Really the severity of the mechanism of the accident itself is very valuable information in terms of deciding how at risk the patient is of having internal injuries that you can’t see when you’re first evaluating them,” said Maggin.