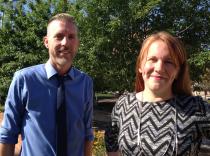 (Photo by Jacob McAuliffe - KJZZ)
Joan Servis is executive director for the Arizona Coalition to End Homelessness. Shane Groen is the coalition's director of special initiatives.

A Veterans Health Administration program has helped reduce hospitalization among homeless veterans, according to a report issued Thursday.

H-PACT is one of several services offered through the Phoenix VA’s Community Resource and Referral Center near Thomas Road and 15th Street.

“It’s supposed to be in the community,” said Shane Groen with the Arizona Coalition to End Homelessness. “It’s a little less daunting for a lot of the veterans that are resistant to the VA and a little easier to get to.”

“We’ll take the lessons learned from addressing veteran homelessness and pivot to address family homelessness, and then learn new lessons with that population as well.”

The coalition works with the VA to target homeless veterans for placement into permanent housing. H-Pact was started in 2011 as part of a national initiative to end chronic veteran homelessness.