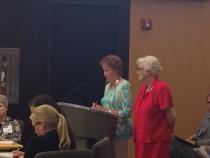 The Maricopa County Board of Supervisors approved the canvass of last week’s presidential preference election in a 4-1 vote. The lone dissenter was Supervisor Steve Gallardo, the board's only Democrat, who said there were too many unanswered questions to certify the results.

A lawyer for the Bernie Sanders campaign said at the conclusion of the meeting he was considering a legal challenge over provisional ballots that were not included in the final tally. He said some of them may have been cast by voters who were stripped of their party affiliation by mistake.

Last week’s election was marred by long lines at the polls that forced some voters to wait for more than five hours to vote and deprived others of the chance to vote at all. There was also a high portion of provisional ballots that were deemed ineligible.

At Wednesday’s meeting, voters scolded the supervisors for approving the county recorder's plan to have only 60 polling places, down from 200 four years ago. One voter told the supervisors that the long lines created a safety issue, since voters were forced to stand in the sun without water.

Supervisor Denny Barney said he was satisfied with the logic behind the decision, which was based on previous turnout rates and the number of eligible voters.

“You can call us stupid, you can call us ignorant, you can tell us how dumb we look, but you can’t call us dishonest, because it was based on empirical data,” Barney said.

While some of the voters who spoke called for Purcell and Osborne to resign, Barney said he trusted the current elections team to make sure the same mistakes never happen again.

During the meeting Gallardo asked Osborne if there was any truth to Phoenix Mayor Greg Stanton’s allegation that minority voters were disproportionately impacted by long lines.

“I have not seen the complaint, but I can tell you, I did not intentionally leave out any racial minority,” Osborne said. “I did not leave out any group of registered voters. I did not try to suppress the vote in any way, shape or form.”

Osborne said there is a reason the long lines could have impacted heavily Democratic areas more than others. She said it has been eight years since Democrats had to prove their party affiliation, since the last presidential preference election with Democratic candidates was in 2008.

Osborne said that meant many voters who turned out on March 22 did not realize they were actually unaffiliated or independent, because they were in the habit of voting Democratic ballots in state primary elections in the past eight years. When those voters arrived at the polls, they had to vote provisionally. Provisional ballots take longer to process, causing longer lines.

According to the Maricopa County Recorder’s final election results, 24,630 provisional ballots were cast at county polls on Tuesday, and 19,999 of those were rejected. Most were tossed out because the voters were not registered with the Republican, Democrat or Green parties.

County officials said the 4,631 provisional ballots that were ultimately counted included 46 cases where an investigation revealed that voters had mistakenly been stripped of their party affiliation through an error.

Chris Sautter, a Washington, D.C.-based lawyer representing the Bernie Sanders campaign, said he is concerned the number of voters who lost their party affiliation through no fault of their own – and whose votes were not counted - could actually be much higher.

He tried unsuccessfully to persuade the board of supervisors to hold the canvass open while the issue is investigated. After the canvass was certified, Sautter said he would consider a legal action or a challenge of the state canvass.