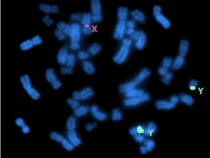 (Photo courtesy of National Library of Medicine via Arizona State University)
Understanding the differences between the sex chromosomes is essential for understating traits involved in some sex-biased diseases (most famously in color-blindness and hemophilia).

A human’s genetic makeup is determined by the shuffling of over 25,000 genes from a mother and father across 23 pairs of chromosomes. The exception is the X and Y chromosomes, which determine sex. But new ASU research suggests what was once thought to be a clear-cut divide of where sex is assigned may be blurrier than we realize.

The very tips of those X and Y chromosomes still get shuffled, but the line that separates those tips from the rest of the sex-determining genes on the chromosome is now called into question.

ASU researcher Melissa Wilson Sayres said what was an exact line for all people may actually split roughly in the same area, which could include the swapping or exclusion of nearby genes.

“Because this swapping is sloppy over the boundary, because it doesn’t just stop, it helps illustrate this really strict idea of XX and XY being female and male is much fuzzier than we think,” Wilson Sayers said.

One of those nearby genes, the key sex-determining gene that develops testes, could complicate sex assignment. Wilson Sayers also notes the implications of inconsistent boundaries on X and Y chromosomes across populations.

“We don’t know if the fuzziness in this boundary is at the same place across all human populations," said Wilson Sayers. "If individuals have fuzziness at different places it could affect whether they’re able to have fertile offspring.

Wilson Sayers said this research raises questions about human gender and the origins of sex-related disorders, such as color-blindness and hemophilia. It also may further complicate research on the evolution of modern X and Y chromosomes.