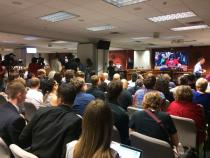 (Photo by Jude Joffe-Block - KJZZ)
Secretary of State Michele Reagan's press conference on March 28, 2016.
(Photo by Jacob McAuliffe - KJZZ)
Many polling place lines, like this one at the Arizona Historical Society Museum at Papago Park, wrapped on for hours on March 22, 2016. 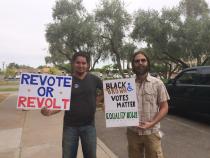 (Photo by Jude Joffe-Block - KJZZ)
Chi Nieves and Scott McConnell want there to be another chance to vote in the presidential preference election given that many voters were unable to cast ballots or had to vote provisionally.

The top election officials for both the state and Maricopa County admitted Monday to making mistakes that led to hours-long lines at polling places for last week's Presidential Preference Election. But both insisted there were reasons for the decisions they made.

Secretary of State Michele Reagan acknowledged she knew that Maricopa County had set up only 60 polling locations. That compares with about 200 in 2012, when there was only a Republican primary, and more than 400 in 2008 when both major parties had contested primaries.

"We put our faith in counties," she said. And Reagan said she was "excited'' that Maricopa as well as other counties had set up "polling centers'' where any registered voter could cast a ballot, rather than having to show up at his or her own designated location.

But Reagan said she shares at least some of the blame.

"I wish I had questioned that 60 were not enough,'' she said. "For that, I take responsibility."

Maricopa County Recorder Helen Purcell, whose office set up the election, was more direct when questioned by lawmakers.

"I made a giant mistake," Purcell said.

"That's an understatement," said Rep. Michelle Ugenti-Rita, who chairs the House Elections Committee. And several of those testifying at a hearing demanded Purcell resign.

But Purcell said there was reason to believe 60 locations would be enough. Last Spring her team estimated there would be 1.2 million residents eligible to participate in the primary and 890,000 would be on a permanent early voting list, meaning they had gotten ballots in the mail and would not be expected to turn out at the polls on March 22. Purcell calculated there would be 310,000 possible voters at the polls, and given the 2008 turnout of 23 percent, Purcell figured that would mean 71,300 voters would actually show up.

As it turned out, the number of possible voters at the polls this year was actually 341,545 and there was a 24 percent turnout, meaning 83,489 voters showed up. Purcell said her office had tried to anticipate up to an average of 1500 voters at each polling place, which is consistent with the 83,489 voter turnout.

Yet some polling stations were more heavily trafficked than others. Some had lines all day long and some voters did not get to cast ballots until after midnight despite arriving before the official poll-closing time of 7 p.m.

Purcell told the committee she had expected additional poll workers and electronic poll books would allow for faster processing. She also said she had to tried to “downsize” the election this year because funding for the election had not been reimbursed by the state legislature.

Jen Marson, lobbyist for the Arizona Association of Counties, also blamed some of the problem on what she said is the lack of state funding.

Marson pointed out that lawmakers agreed in 2012 to cover the full cost of the primary. But last year, in a budget-saving moving, lawmakers trimmed funding to $1.25 per registered voter. And legislation to restore funding — tied to eliminating future presidential primaries — has yet to get final approval.

That did not impress Rep. Jeff Weninger, R-Chandler. He pointed out that $1.25 figure is the same amount lawmakers gave the counties back in 2008.

Ugenti-Rita agreed, saying that there really was no funding cuts.

And Rep. Ken Clark pointed out that legislation Reagan proposed to restore funding was linked to eliminating future presidential primaries.

Tied up in all of this is the question of whether the shortage of polling places, coupled with where they were and were not located, violated the federal Voting Rights Act.

That law specifically prohibits states from doing anything that discriminates against minorities or dilutes or impairs their ability to vote.

Based on its prior history of discrimination, Arizona was in a group of states that had to submit any changes in voting laws to the U.S. Department of Justice for "preclearance.'' That included changing the location and number of polling places.

In 2013, however, the U.S. Supreme Court voided that preclearance requirement.

Clark suggested to Purcell that her decision to set up just 60 polling places never would have met with Department of Justice approval. Purcell, in acknowledging the rest of the anti-discrimination provisions of the Voting Rights Act remain, conceded she never considered whether the sharp drop in places to vote would have passed Justice Department scrutiny.

Several of the speakers said there were many people who did not get to cast a ballot, having decided the lines were too long.

Some said Purcell should resign at the conclusion of the hearing.

“To those officials that failed us, you must show us you have integrity, you must resign,” Patrick Seifert said in his testimony. “Stop pretending this is how things are supposed to be.”

Voters also raised other problems beyond the lines, not all of which were limited to Maricopa County.

Danny Robinson told lawmakers how his daughter stood in line for hours at the polls in Tucson but was told she could not vote because county officials listed her as a political independent.

He said that disenfranchised his daughter.

"I want justice for my daughter,'' Robinson said. "I want a revote.''

"We will explore everything, said Rep. J.D. Mesnard. But Mesnard threw cold water on a revote, saying there are too many hurdles, including disenfranchising those who did manage to vote.

“I don’t want to get somebody’s hope up that we can just snap our fingers and redo things,” Mesnard said. “It does not work that way.”

Democratic Maricopa County Supervisor Steve Gallardo objected to Mesnard’s analysis on whether there could be an additional day of voting allowed.

“If the political will is there, it can be done,” Gallardo said. Absent an additional day to vote, Gallardo said there was another action that should be taken.

“This canvass has to be challenged and allow the courts to decide how to move forward,” Gallardo said.

Weninger pointed out that Gallardo had been at the board of supervisors meeting that approved Purcell’s plan. Gallardo said he should have requested a roll call vote to vote against the plan.

Reagan's comments that she was interested in improving the process for voters drew a skeptical, if not outright hostile, response from Rep. Jonathan Larkin.

He pointed out Reagan’s office is sponsoring SB 1516, an extensive rewrite of state election laws. Larkin called that "basically a dark money bill'' which will make it easier for organizations that don't disclose donors to spend money on elections.

That drew a sharp response from Mesnard who said that was "injecting politics'' into the hearing. And he said that question has nothing to do with the questions about the problems with the primary.

Larkin would not back down.

"This is a voter suppression matter,'' he said. "How can the voters trust that the Secretary of State's office is acting in their best interest when we are pushing such policies like SB 1516?''

During the hearing, there also were complaints from some people who pointed out that results were being released by counties and Reagan's office even as people were still standing in line. Reagan said that was in accordance with state law.

"But if the law was to change, we would certainly follow it,'' she said.

Some in their testimony referenced a new law that Republican members of the House elections committee pushed through earlier this session that makes it a felony for anyone other than a relative or caregivers to turn in someone else’s early ballot.

Activist Randy Parras highlighted the new legislation when it was his turn at the podium.

“If you help somebody, your neighbor, bring in a ballot, you are a felon if you successfully help them to vote,” Parras said. “You tell me, what is the crime now, when you deny people the right to vote?”

Only a small portion of the members of the public who registered to speak were able to do so. After about two and a half hours Ugenti-Rita said the hearing would soon have to adjourn so members could go to the House floor.

But that didn’t sit well with those who were still waiting their turn.

Barbara Brown, 70, made her way to the microphone even though her name had not been called.

“I’m not going to leave here like I had to leave the polls without giving my two minutes of testimony,” Brown said.

Brown told the committee she was a disabled voter who had been unable to cast a ballot last Tuesday. She kept testifying about her experience on Election Day even as a security guard approached her.

Brown wasn’t arrested, but later in the day one person was, according to the Department of Public Safety. Demonstrators left the hearing when it concluded and flooded into the gallery on the House floor where election bill SB 1516 was to be introduced.

The House was temporarily recessed by Majority Leader Steve Montenegro and Speaker David Gowan after demonstrators began chanting in protest.

Security carried out at least one protester while others shouted, "Shame on you,” and “The whole world is watching.”