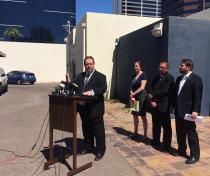 Arizona Democratic Party leaders say they are exploring the possibility of a lawsuit against Maricopa County for changes to polling places this year that caused many voters to wait in long lines for hours or give up on voting in the presidential preference election all together.

A lawyer for the party said those changes would not have passed U.S. Justice Department scrutiny if the full Voting Rights Act were still in effect.

Jim Barton, a lawyer for the Arizona Democratic Party, said the problem was not only that County Recorder Helen Purcell reduced the number of polling locations from 200 to 60. He said it was also an issue that the recorder's office made those 60 centers open to all voters, requiring the use of electronic poll books to verify that voters had not already voted elsewhere.

Barton said those electronic poll books malfunctioned and contributed to the delays.

If the full Voting Rights Act was still in effect, he said, the U.S. Department of Justice would have blocked Maricopa County election officials from making those two changes this election year.

Until a 2013 U.S. Supreme Court ruling invalidated a major section of the Voting Rights Act, election officials in states like Arizona that had a history of discriminating against minority voters needed approval from the Justice Department before making any voting changes.

“Those two changes in the same election, when the justification is to save money, would have never have been cleared by the Department of Justice as a legitimate change to the voting process,” Barton said.

Barton said he is also considering whether the long lines to vote mean there may have been violations of the Americans with Disabilities Act.

But Tammy Patrick, a Democracy Fellow at the Bipartisan Policy Center in Washington, D.C., said it is not so clear how the federal government would have responded to the Maricopa County Recorder’s plan for 60 polling places this year if pre-clearance from the Justice Department were still required.

Still, Patrick acknowledged federal oversight would have provided an extra layer of scrutiny to the change.

Patrick used to be in charge of federal compliance for Maricopa County’s Elections Department back when the Justice Department reviewed every one of Arizona’s election changes.

“I think the Department of Justice would have certainly looked very closely at the numbers [of the polling places] and where they were located, because they did with all of our submissions,” Patrick said. “But I can’t speak to whether or not they would have pre-cleared it as it stood or whether there would have been some additional sites that would have been added.”

Patrick said Maricopa County's move to open up voting centers to all voters, no matter where they live, was meant to provide voters with more options. She said she was aware of past changes in Texas to reduce the number of polling stations and turn them into voting centers that were approved by the Justice Department.

Barton said that if he does decide to go forward with a lawsuit the goal would be to get a judge to take charge of the system so moving forward "county [election officials] would have to demonstrate they had protected the rights of voters."

He said there is also a possibility of forcing jurisdictions back under Justice Department oversight if evidence shows there was disregard for voting rights.

Democratic leaders say in addition to Maricopa County officials, they blame Republican state leaders and the Republican-led legislature for Tuesday's voting fiasco. They say Republican lawmakers have passed budget cuts and laws that make it harder for people to vote.

"Governor Ducey's administration set the tone that no government spending is good or appropriate ever. And that yesterday hurt Arizonans," said Sheila Healy, the executive director of the Arizona Democratic Party. "Secretary of State Michele Reagan failed to coordinate with the counties in a way that prevented these long lines and systematic irregularities."