Some Arizona Voters Cast Ballots After Midnight Due To Long Lines 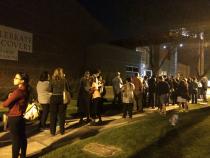 (Photo by Jude Joffe-Block - KJZZ)
The line at the Salvation Army polling place on 3rd Avenue at 11:20 p.m. 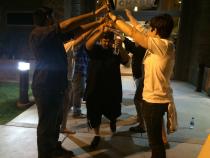 (Photo by Jude Joffe-Block - KJZZ)
A crowd of observers watching the polling place made a bridge for the final voters to walk under after they succesfully cast their ballots.

At the downtown Phoenix polling location at the Salvation Army on 3rd Avenue, the last voters finally cast their ballots just before 12:20 a.m. — more than five hours after Arizona polls were supposed to close and many hours after the Presidential Preference Election had been called for Donald Trump and Hillary Clinton.

Anyone who was in line before 7 p.m. was allowed to vote, but at that time the line of voters snaked around the block.

Voters blamed the long wait on a decision by Maricopa County Recorder Helen Purcell to reduce the number of polling places for this presidential preference election from 200 to 60.

Lawyer Eddie Slade got to the line at 5:15 p.m. and left because of the wait, and then came back at 6:55 p.m. to be one of the last voters at this location.

At 11:20 p.m., an hour before he would ultimately vote, Slade said he felt good about his decision to stick it out.

“We are not going to shut down even though the Maricopa County Recorder was completely incompetent,” Slade said. “Everyone should be calling Ms. Purcell and voicing their anger because this is absolutely ridiculous.”

Like many at this location, Slade said he was planning to vote for Vermont Sen. Bernie Sanders despite the fact that he had already been declared the loser of the race.

“Everyone here is for principles and one of those is making sure your vote counts, no matter who you’re voting for,” Slade said.

Despite voters’ frustration with election officials and anxiety over missed appointments and the late hour, the mood was light. A saxophone player serenaded the line and everyone cheered each time voters exited after successfully casting a ballot. Fellow voters and campaign volunteers brought pizza and water to those waiting in line.

Rosemary Torres, who planned to cast her vote for Ohio Gov. John Kasich, said she had managed to read 100 pages in her book and had never considered giving up. Though she said she was frustrated that election officials had apparently been “asleep” when they planned.

“One of the reasons it was not a burden to be here is I thought about the people who died today by the hands of terrorists,” Torres said, referring to the terrorist attacks in Brussels, Belgium, earlier in the day. “To be here to help send a message that despite murder, despite terror, the American people stand for peace, democracy and civility.”

“I wanted to hear stories from voters to figure out how they survived the day and what the mood was and also frankly show some solidarity to gut it out to the very end,” Spencer said.

Spencer said tonight was not the right time to cast blame for what had happened, but the process of figuring out what went wrong and how to fix it would start on Wednesday.

“Secretary Reagan is going to work with the counties to try and make it better to make sure this doesn’t happen again,” Spencer said. “And it is just too early to know what prescription that is.”

Spencer said under current rules the Secretary of State’s office does not vet or approve the counties’ plans for how many polling places to open. He said there may be statutes or procedures that should change in the future.

As the final voters emerged after casting their ballots, a dozen or so observers and campaign volunteers cheered and made a triumphant bridge with their arms for the voters to walk through.

Arizona registered party voters who voted in-person: How long did you wait to vote on Tuesday? #ArizonaPrimary