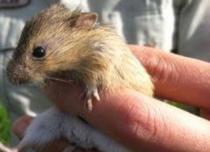 A small mouse recently placed on the Endangered Species Act list just got a sizeable upgrade to its protected habitat. But continuing threats still have scientists concerned.

Placed on the endangered list in June of 2014, the New Mexico meadow jumping mouse has 29 identified populations across Arizona, New Mexico and Colorado. But federal officials have declared 14,000 acres of land across those states as critical habitat, mostly along riparian areas with flowing water and grasses.

With 95 percent of habitat for the mouse on federal or state land, habitat segmentation and livestock grazing have reduced the number of meadow jumping mouse.

Biologists also suggest major population numbers were lost due to flooding, such as the post-fire flooding after the 2011 Wallow Fire in the Apache-Sitgraves National Forest in Eastern Arizona.