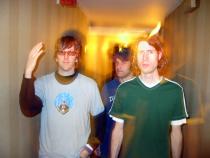 Gloritone was a band from Tempe in the late ‘90s/early 2000s - at a time when Tempe was still known for its vibrant music scene.

Many people thought the band would gain national recognition, particularly since Gloritone signed to a major record label, RCA. They never did reach commercial success, but many musicians and fans in the local scene regarded them as a treasure.

Now the band is re-releasing a new version of their second album, Fainter Farther Still for its 15th anniversary.

Scott Hessel, the band’s drummer, spoke about the reissue.