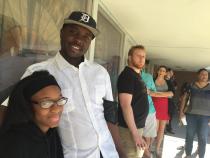 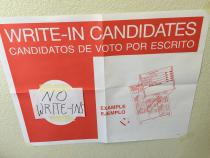 (Photo by Tracy Greer - KJZZ)
No write-in candidates were allowed in the Presidential Preference Election.

Lines two hours long are usually seen in Disneyland, but today Valley voters are standing in the hot sun to cast their ballot in Arizona’s Presidential Preference Election.

The expected wait time this morning at Memorial Presbyterian Church in the Arcadia neighborhood in Central Phoenix was 90 minutes.

Several people left when they saw the crowd, but Vaughn Willis was not one of them.

“There’s no turning back. You know, I actually have some other things to do today, but stuff’s going to have to wait. This is probably the most important election of my lifetime, so,” Willis said.

Willis said he was there to vote for Bernie Sanders – and to show his teenage daughter what the democratic process is all about.

Poll workers say the long waits in the county could be due to higher than normal voter turnout, as well as a large reduction in polling places – just 60 this year, down from 200 in 2012.

Independent voters who want to cast a ballot in today’s presidential preference election can use a provisional ballot, but election officials say that vote won’t be counted.

Secretary of State Michele Reagan said she’s expecting a large turnout today. And she says while some might not go to the polls physically, the response to mail-in ballots has been overwhelming.

Bob Boyd is working the polls at the Memorial Presbyterian Church, as he has for more than 20 years. He said in past elections, the wait has been closer to 20 minutes.

“We’re real busy. We’ve been steady ever since 5. They were here at 5:15 this morning, when we was setting up,” Boyd said.

Polls stay open until 7 p.m. — and voters can go to any of those 60 polling places open in Maricopa County.