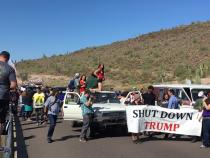 (Photo by Matthew Casey - KJZZ)
Protesters lined up early ahead of a Donald Trump event in downtown Phoenix on March 19, 2016.

(Photo by Matthew Casey - KJZZ)
The scene inside the Phoenix Convention Center on Saturday during a taping of Sean Hannity's show with Donald Trump. 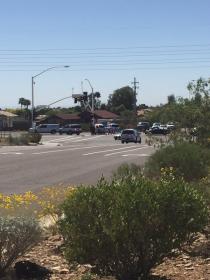 (Photo by Katherine Fritcke - KJZZ)
Shea Boulevard and 126th Street toward Fountain Hills was one of the intersections closed by law enforcement after protests affected traffic Saturday.

For hours, the protesters — about two dozen in total — parked their cars in the middle of the road, unfurling banners reading "Dump Trump" and "Must Stop Trump," and chanting "Trump is hate." The anti-Trump activists say they were protesting “the violence and anti-immigrant views promoted by the Republican frontrunner.”

The immigration rights group Puente said three of their protesters were arrested at the scene after they chained themselves to cars blocking Shea Boulevard.

Traffic was backed up for miles, with drivers honking in fury. Maricopa County Sheriff’s deputies and Scottsdale police officers were turning vehicles away from Fountain Hills and shut down Shea Boulevard at numerous intersections in the hours leading up to Trump’s speech.

Seth Nelson is vacationing in Arizona from Minnesota and was among those turned back.

The road was eventually cleared and protesters marched down the highway to the rally site, weaving between Trump supporters who booed and jeered them.

"Learn to speak English," one Trump supporter shouted at the protesters. "You can't even show your face," another pro-Trump attendee said to a protester with a bandana over her face.

Trump shared his vision of the border wall he wants.

Trump and Arpaio have formed a political alliance in recent months, and the billionaire hopes Arizona can serve as a model on how he could win in November.

The rally itself at Fountain Park remained fairly peaceful, with security occasionally escorting out protesters. Thousands gathered for the outdoor rally in the suburb where Arpaio lives. Officers with the sheriff's department were posted throughout the park, on rooftops and on patrol. Officers wearing bulletproof vests stood alongside a Humvee with a gun turret on top.

Trump told the crowd that he is "winning by massive landslides" and vowed to rebuild the military and build a border wall with Mexico. He drew cheers from the crowd when he vowed to protect the Second Amendment — which for pro-gun Arizona is a particularly important issue.

He never acknowledged the earlier blockade or the protesters in the crowd.

After the speech Trump supporter Glen Brazaitis said illegal immigration is one of the most important issues to him.

"A lot of people do think Trump is over the top and crazy but I think he may be the only one who can accomplish anything," he said. Brazaitis admits he isn’t sure Trump can actually deliver on all of his promises on border security, like building the wall.

"I am hoping to get 25 percent of what he says, but I think that is still to be more than pretty much anyone else," he said.

Earlier Saturday, Trump was in downtown Phoenix with Arpaio and former Arizona Gov. Jan Brewer to record an episode of "Hannity" for Fox News.

About an hour before the event, roughly 40 protesters chanting in Spanish gathered near where Trump supporters were entering the Phoenix Convention Center.

"Maybe economically, he’s a good businessman in some senses, but there’s a lot of areas where he falls short. I don’t want to wind up in World War three, the way he’s such a hot head," Chambers said.

Trump stuck to talking points during the television taping, but also lashed out at Clinton and rival Republican Ted Cruz.

Trump supporters trickled through protesters and security to attend — many wearing red, white and blue.

Kitson said the wall Trump vows to building all along the Mexican border may or may not be realistic, but it "is getting people's attention."

KJZZ’s Jude Joffe-Block, Matthew Casey and Katherine Fritcke, and the Associated Press contributed to this report.