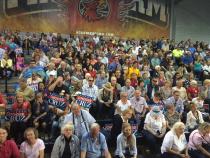 Republican presidential hopeful Sen. Ted Cruz touted his stance on border security in Arizona on Friday days ahead of that state’s upcoming presidential primary. The candidate is trying to close Donald Trump’s lead in the state.

Speaking to an at-capacity crowd at Arizona Christian University in Phoenix, Cruz attacked Republican frontrunner Trump on immigration. Though Trump has campaigned on stopping illegal immigration, Cruz tried to paint his rival as two-faced on the issue.

He cited previous campaign donations Trump made to Senators who supported a path to citizenship for unauthorized immigrants, and alleged Trump may have backed away from his campaign promises in an off-the-record interview with The New York Times.

“Donald Trump is telling us and telling The New York Times he is lying to us,” Cruz said. “The difference is as president I will secure the border and we will end illegal immigration.”

The campaign event was televised live on Fox News and was hosted by commentator Sean Hannity.

Cruz told Hannity it was still possible for him to win the needed delegates to become the party’s nominee. He said the departure of Florida Sen. Marco Rubio from the race was helping him and hurting Trump.

“The overwhelming majority of those Rubio supporters have come over and are supporting us, so we keep getting stronger and stronger,” Cruz said.

Arizona’s Tuesday presidential primary is winner-take-all for the Republicans, and 58 delegates are at stake. Cruz acknowledged that Trump was ahead in early ballots but told his supporters they could make it up with high turnout on Tuesday.