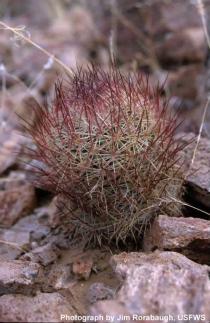 (Photo by U.S. Fish and Wildlife Service)
The acuna cactus is listed as endangered and the primary threat is development and mining operations. There are only five locals in Arizona where these cacti exists and only one of them is protected, that’s in Organ Pipe Cactus National Monument.

Species like polar bears and California condors are often thought of when endangered species are mentioned. But now, an ASU researcher is saying greater immediacy and a dramatic shift in funding is needed to preserve and grow less-known endangered species.

The 40-year-old Endangered Species Act receives $1.2 billion annually and has successfully prevented some species extinction. ASU’s Leah Gerber argued current funding is sufficient, but the act’s dated funding formula holds back the growth of some species.

“There are species that are actually receiving more than the recovery team specifies as required," said Gerber. "So, shift the surplus funds from those top fifty overfunded species to those that are severely underfunded and by doing that, we would erase the funding deficit for more than 180 species.”

Gerber argues that some animales get disproportionate attention while some plants and invertebrates, among others, could use a little more cash.

Gerber advocates a return-on-investment approach, meant to reallocate funds without requesting for more money. She believes funding should be based on how species have either improved, stagnated or declined in population.

Well how would she determine that? How would she characterize how a particular species is doing?

Gerber said if there was a shift funding from species in the costly success and costly failure categories to the injurious neglected species, we may see growth in those populations. For example, there are seven cactuses in Arizona on the Endangered Species List.

“Many of our cacti in Arizona fall into the category of injurious neglect. The acuna cactus is one. It’s listed as endangered and the primary threat is development and mining operations," she said. "There are only five locals in Arizona where these cacti exists and only one of them is protected, that’s in Organ Pipe Cactus National Monument.”

One example is the acuna cactus, found in Pima and Pinal counties. Degraded by development and mining, the plants have not recovered due to insufficient funding. Gerber said with money reallocation, the cactus population could bounce back.

A petition submitted by mining company Freeport McMoran to delist the acuna cactus was recently considered non-substantial. The company claimed the cactus’ taxonomic classification gave it a larger land range, but upon review, the U.S. Fish and Wildlife Service found the cactus’ taxonomy to be correct and declined further review of delisting.