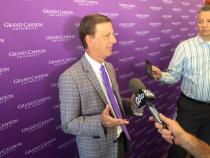 Grand Canyon University (GCU) announced Friday that its plan to return to nonprofit status has been rejected by its accreditor, the Higher Learning Commission (HLC).

The announcement came after the private Christian university spent more than a year working on the proposal. GCU President and CEO Brian Mueller told investors last month that he’d hoped the transition would take place by summer.

“The university would have benefited tremendously from this, and we’re going to be harmed as a result of not getting it,” Mueller said on Friday.

If the plan had gone forward, GCU could have become a voting member of the NCAA, and donations to the school made tax-deductible. The university would have also received tax benefits, and been allowed to compete for grant money.

Mueller said the HLC’s visit to campus went very well, but the HLC board ended up under the impression that the school's academics would fall under the umbrella of the for-profit service company. Mueller said that's not true, and had the plan gone forward, deans and faculty would have controlled GCU academics. He said there must have been some confusion or misunderstanding, and expressed disappointment the plan failed.

“I just wish we would have been given a chance, as many are, to have a discussion about that,” Mueller said.

GCU will find a path forward, Mueller said, but he declined to provide details how. In the meantime, it will continue working to disprove the perception associated with being a for-profit institution of higher learning.

GCU has invested more into the campus than it has made in after tax profits, Mueller said. The school started out with 100 acres, is now at 250 and plans to grow to 400. Construction projects are underway across campus as part of a plan to increase the number of on-campus students by about 10,000 over the next five years.

“You know one of the criticisms of Grand Canyon has been, well, if you have investors you will always care more about your investors than you do your students,” Mueller said. “There is absolutely no evidence to indicate any of that.”

GCU can reapply to become a nonprofit beginning in the fall, according to HLC. The university based in west Phoenix chose a for-profit status in 2004 to avoid bankruptcy. Its for profit entity, Grand Canyon Education Inc., became a publicly traded company in 2008.

“This was the potential for a new era that could have been tremendously beneficial,” Mueller said. “It would have allowed us to keep investing and to keep freezing tuition and making this affordable.”