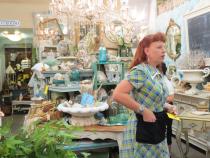 (Photo by Annika Cline - KJZZ)
A designer stands in front of her section at April's Sweet Salvage event.

Typically it’s good business practice to be open at least a few days a week. But an antique store in Phoenix manages to open only four days a month – and it’s wildly successful.

The morning rush along Seventh Avenue has died down. But there’s a different rush just starting here at Sweet Salvage. A line of at least 200 people wraps around the building, dotted with umbrellas for shade.

At the very front, Terry Parvan  and Sondra Campbell say they've been waiting about two hours — but the weather's nice. And they’ve been sewing to pass the time.

The doors won’t open for another 20 minutes, so inside the store it's still quiet.

"Each month we pick a different theme and each designer creates a space that is designed to the theme," said Sweet Salvage owner Kim Rawlins.

This month’s theme is Color Stories. The 12 designers collected items to go with their chosen color. Designer Lisa Mallas Matthews was inspired by the book "Fried Green Tomatoes."

"So I tried to incorporate not only the color but some of the themes from the book as well so the idea of the café and got a hog boiling pot over here," Matthews said.

The designers travel around the country and sometimes beyond, finding vintage items to fill the 5,000-square-foot space.

Right at 10 the doors open, and the fun begins. People squeeze by wooden dining tables, upholstered chairs and oddities like a wrought iron gate. There are new shoppers and seasoned veterans.

The warehouse is already filled with more than 200 shoppers, with more waiting to get in. There’s no way 200 shopping carts would fit, too. Instead, everyone wears a lanyard with a letter and number, which corresponds to a bin in the back — 234 bins total. Employees called runners take items to customers’ bins and stick yellow tags on bigger items to be moved later.

In the beginning some doubted a four-day-a-month store was even possible. But Rawlins said she’d never trade it for another antique shop.

"Every month I fall in love with it more," she said.