Arizona's Independents Push For More Rights At The Polls 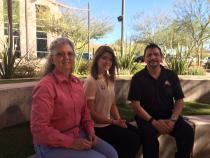 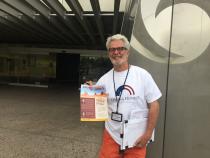 (Photo by Jude Joffe-Block - KJZZ)
David Handley is an independent voter who is gathering signatures to put an intiative on the ballot that would change Arizona's primaries so all candidates would be listed on a single ballot, regardless of their party.

Independents are the largest voting group in Arizona. For the past three years, the number of voters registering or re-registering as independent has outpaced new Republican and Democratic registrations combined.

But the last voter registration period that ended Feb. 22 was different. The number of independents in Arizona dipped by about 11,000 voters even as more than 41,000 new voters registered. That’s likely because unaffiliated voters can’t participate in Arizona’s upcoming presidential primary, and some independents chose a party so they would not be left out.

The rule that excludes independents from the presidential primary is just one example of what independents in Arizona find to be unfair about the state’s voting system.

In recent months, independent voters in Arizona have begun banding together to push for more rights at the polls.

Patrick McWhortor of the group Open Primaries recently organized a phone “town hall” for independent voters to discuss these efforts. He opened the call by saying independent voters, despite their large numbers “are treated like second-class citizens.”

McWhortor told listeners that Open Primaries is trying to get election reform initiatives on the November ballot. One would give independents more choice by changing state primaries so every candidate would appear on a single ballot. The top two candidates would advance regardless of party affiliation. The initiative would also reduce current barriers for independents running for office.

While independents can currently vote in state primaries, under the current system they must choose one party’s ballot and therefore cannot pick and choose between different parties for different races.

Organizers say more than 13,000 people called in to the phone town hall from all over the state.

One of them was Deb Gain-Braley, a 57-year-old retired accountant in Tempe who recently switched her registration from Republican to unaffiliated.

Gain-Braley became interested in independent voting rights issues after she realized that she would not be able to vote in Arizona’s March 22 presidential primary unless she re-registered again with a party.

“I think that no one should have to choose a party to vote in America,” Gain-Braley said. “So I went looking to see if there were any other organizations arguing against what’s going on.”

In addition to the Open Primaries group, she also found Independent Voters for Arizona, a campaign focused on opening the presidential primary to independents.

Gain-Braley is now a volunteer for Independent Voters for Arizona. The campaign is led by Timothy Castro, who argues it’s not fair to exclude over a million independent voters from a presidential primary paid for with their taxpayer dollars.

“If we are paying for something we aren’t allowed to vote in, then let us vote in it, or don’t make me pay for it,” Castro said.

That logic has struck a chord with Secretary of State Michele Reagan. Earlier this month she spoke to a House committee about the presidential primary, pointing out that independents are more than a third of the state’s voters.

“This is the one election they cannot participate in, and yet as taxpayers everyone pays for these elections,” Reagan said.

The chairman of the Arizona Republican Party hasn’t taken a position on the bill so far, while the Arizona Democratic Party opposes it.

Arizona Democratic Party spokeswoman Barbara Lubin said participation would drop if the parties were to run caucuses, so it is worth the state’s investment to keep running the presidential primary.

Lubin said though her party had not taken an official position on independents participating in the presidential primary, she said the party would not have a problem with it.

“We are a big tent group,” Lubin said.

Meanwhile, independents say they will keep pushing to find a way into future presidential primaries.