Phoenix Soccer Club Helps Refugees On And Off The Field 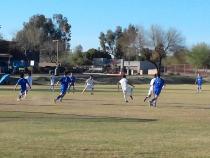 Soccer is a sport loved around the globe. People gather to cheer their home country in the World Cup and play in the fields in their home towns. For a group of refugees in Phoenix, soccer is a way to adjust to their new home and create a community on and off the field.

The players on Team Milan tried to nail a complicated shot at a recent practice. The idea is that a few players jump over the ball, and the player behind them scores, confusing the other team.

The under-15 team is part of North Phoenix Christian Soccer Club. Almost none of these players are originally from Phoenix.

“My parents are from Central Africa, but I was born in Chad, so I grew up in Chad,” said team member Desire Djekoula.

Djekoula and all but one of his teammates are refugees. They have similar stories. Some, like Djekoula, were born in refugee camps outside their parents’ homeland. Then, their families ended up here. In a brand new place, there was at least one thing that felt familiar.

“I like playing soccer because back in my country we don’t know nothing about football or basketball,” Djekoula said. “Everyone, like, just plays soccer and stuff. I was born playing soccer.”

He said it was an adjustment playing on grass instead of sand, but the heart of the sport is the same.

North Phoenix Christian Soccer Club has 12 teams, about 180 players total. The club estimates about 95 percent of players are refugees. That wasn’t the case 10 years ago. A few refugees joined, and others learned about the club through a friend or sibling, and the numbers grew.

Anthony Htoo follows in the footsteps of two older brothers who played with the club.

“This is like family because we’re all from different places; we’re all refugees; we all play and, you know, have fun together,” Htoo said.

They have a lot of fun, but you can tell they take the sport seriously. Htoo said soccer is life for him; after a hard time at school or at home, it’s what he turns to.

“Soccer’s like the only thing that keeps me going right now. All I think about is soccer,” Htoo said. “When you play soccer, it’s like happiness.”

After practice, the team goes to McDonald’s. Coach Miguel Vazquez is buying. His wife, Alondra Ruiz, said they often feed the team and do extra things off the field.

Many of the players’ parents don’t have cars, so they can’t get the kids to practice. Sometimes they even have trouble finding transportation to work. So, Ruiz stepped up to help with that, too.

She drives a group of refugee women and one man to work, leaving at 10:30 at night to pick them up. They’re janitors in a school district in North Phoenix. They get off too late to take a bus home.

“Sometimes it’s hard. Like right now I wish I could just go to bed,” Ruiz said, laughing. “But especially once they get in the car, everything changes. It’s really worth what I’m doing.”

“We live in a society where people are really selfish, and they just want to take care of their little circle, their little families, and that’s it,” Ruiz said. “They don’t realize that there’s people out there that need each other.”

Ruiz’s son doesn’t even play in the club anymore, but she continues to be a resident soccer mom, and she’s proud of it. She and the players and their parents have formed a new family.