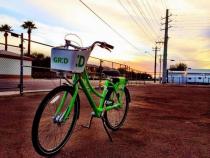 Phoenix's bike share program was supposed to officially launch Monday, but the rollout has been pushed back once again.

Grid Bike Share was originally set to launch in December of last year. Then, it was pushed to January of this year ... then, to April 21.

Now, the program's director says Grid Bikes will be available after the summer's over, with 500 rentable bikes at 50 stations. While some of the high-tech bikes have been delivered, multiple supply chains around the world have caused some hiccups.

Grid Bikes has also stopped looking for a title sponsor to the tune of $3 million, though it has been lining up businesses to sponsor individual stations.

Bike share will also be delayed in Mesa, which had been looking to launch this year, but is now planning on mid-to-late next year based on light rail construction timelines. Tempe wants to get its Grid Bikes on the street immediately after Phoenix's are up and running, either later this year or early next year.