City Of Phoenix Makes Evacuation Plans For People With Disabilities 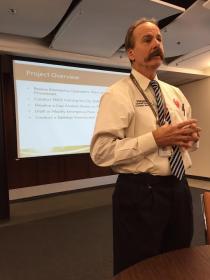 For the past several months, the City of Phoenix has been working on its emergency operations plan, specifically focusing on people with disabilities also known as the “access and functional needs” community.

According to the U.S. Census, around 10 percent of Maricopa County's population has a disability. It’s a diverse and often overlooked population where a one-size-fits-all approach to disaster planning can lead to deadly consequences. Once adopted, this plan will be one of the most comprehensive in the nation.

The story of Huricane Katrina made national and international news when the Category 3 storm made landfall on August 29, 2005. In it’s wake, the storm left more than a thousand people dead.

Many were people with disabilities. About 23 percent of people living in New Orleans at the time were disabled. Like Benilda Caixeta. Her story appeared in the documentary, The Right to be Rescued.

Benny, as she was known to her friends, tried to evacuate using a local transportation company; but no one came. She survived the storm, but then the levies broke and the water began to rise. According to the documentary, Benny drowned.

Her story was not unique.

What happened during disasters like Katrina and Hurricane Sandy and on 9/11 is why the City of Phoenix is drafting an emergency plan for the access and functional needs community.

Phoenix Director of Homeland Security and Emergency Management Kevin Kalkbrenner is in charge of drafting the plan. Part of his job involves engaging stakeholders like Ray Morris with Dads 4 Special Kids to hash out the details at meetings like one held late last month.

"I have a son with autism and cognitive delay," said Morris. "I have to create a healthy environment for him that he can be successful now I have to duplicate that environment in an emergency or disaster what are the things Zachary needs to live as independently as he can regardless of emergency or not."

What Zachary needs is support, understanding, a quiet environment, and his medication.

But if Katrina exemplifies the human condition under extreme duress, how do you make sure individuals like Zachary get what they need during a disaster?

Dawn Bailey was also at the meeting. Her daughter has a rare genetic condition that is currently undiagnosed. For Bailey, emergency planning is daunting. She can’t stockpile her daughter’s medication because many are controlled substances or degrade over time.

"To have to plan for that and realistically say can I survive the next three days, it’s a hard thing to figure out," explained Bailey.

Besides talking to stakeholders, the city has contracted with a company called BCFS, a non-profit emergency management organization.

Kari Tatro is with BCFS. She charactized the purpose of her organization as: "We want to come behind you and say, ‘How can we support you to do what you do during disasters and make sure you have continuity of service during that time, too?’"

Tatro and her team are tasked with ensuring the city can handle mass care, transportation, evacuation, sheltering and communication.

"The plans are deep, we are at this level in the weeds, we're in the details," noted Tatro.

During the two hour meeting, stakeholders posed questions and raised concerns. Notes were taken and promises were made to follow up. For Bailey and Zachary’s dad, Morris, the meeting was a success.

Still, even the best laid plans can go awry. Kalkbrenner knows this. So does Morris.

The city will continue to meet and refine the plan over the next 12 to 18 months. Kalkbrenner hopes to exercise the entire plan by the spring of 2017.