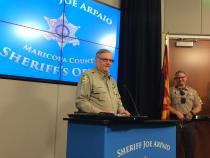 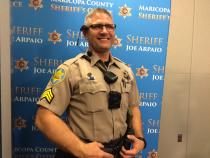 (Photo by Jude Joffe-Block - KJZZ)
Sgt. Darrin Frei of the Maricopa County Sheriff's Office modeled a camera on his glasses.

Maricopa County Sheriff Joe Arpaio announced Thursday more than 500 deputies are currently using body cameras. A federal judge mandated the use of cameras after ruling in 2013 the sheriff’s office had discriminated against Latino motorists.

The cameras can be worn on a deputy’s glasses or collar, and must be on during traffic stops and any interaction with the public.

Arpaio said while he was initially hesitant about cameras, he probably would have adopted them even without the court order because of the current climate. He said there’s been a recent erosion of public trust around the country.

“People no longer seem to trust — in many occasions, not everyone — law enforcement, the media, politicians,” Arpaio said during a press conference at his headquarters. “At least body cams will give us an audio and video perspective.”

He also advised if there is an incident of some kind there should not be a “rush to judgment” based on footage alone.

The cameras are made by the Scottsdale company, Taser. Chief Deputy Jerry Sheridan said the sheriff’s office will spend more than $860,000 a year to store and manage the footage, and the department spent $33,000 on infrastructure upgrades so deputies could upload the camera footage from all of the district offices.

Sheridan said there will be severe consequences for deputies who fail to turn on their cameras, though he said there would be a 60 day grace period as deputies get used to the technology.

That failure is one reason Arpaio and Sheridan and others are now facing contempt of court. Snow is expected to issue a ruling on civil contempt in the coming weeks.

“We had not yet approved this training program,” the monitoring team wrote in its quarterly report. The team said in its report that it was able to observe a training class, and while the instructor was knowledgeable, there was not adequate testing to make sure the deputies had learned how to use the technology.

“Students were required to push the activation button for the camera one single time to demonstrate competency,” the report reads. “These deficiencies may lead to failures to appropriately capture and document incidents in the field.”