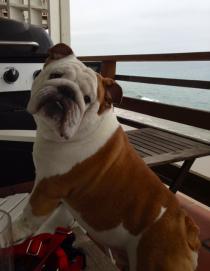 (Photo by Christina Estes - KJZZ)
Tempe council members are set to vote on banning commercial dog and cat sales unless they come from shelters and rescue groups.

A proposed ordinance in Tempe would ban stores from selling dogs and cats unless they come from a shelter or animal rescue group.

According to a council report, the city’s only commercial pet seller gets most or all of his dogs from breeding facilities commonly referred to as "puppy mills," but the owner says he does not buy dogs from inhumane breeders.

The report contains findings from a working group that says federal standards which govern large breeding facilities appear to be substandard and inadequately enforced. The group also agreed that animals bred in large facilities are more likely to have serious health and behavioral problems, which can lead to increased physical, emotional and financial risk to consumers.

If the ordinance is approved, a retailer would be fined up to $500 for each sale. Last year a federal judge upheld a similar ordinance in Phoenix.