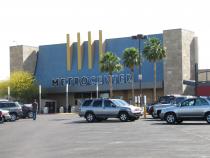 (Photo by Steve Shadley - KJZZ)
An entrance to Metrocenter mall that opened more than 40 years ago but has lost nearly a third of its stores since the start of the recession. 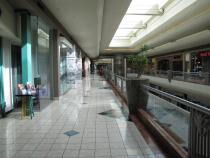 (Photo by Steve Shadley - KJZZ)
A nearly empty corridor on the second floor of Metrocenter during a recent weekday morning. 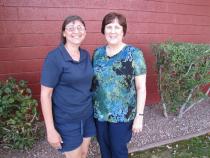 (Photo by Steve Shadley - KJZZ)
Robbin Mofford (left) and Sherry Dudek have organized neighborhood block watch groups near Metrocenter. They claim crime has increased around the mall over the past decade. 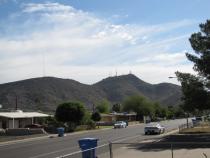 (Photo by Steve Shadley - KJZZ)
A view of North Mountain from a neighborhood in the Metrocenter Redevelopment area. 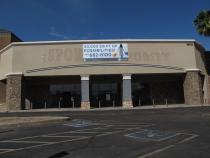 (Photo by Steve Shadley - KJZZ)
A vacant store located in the Metrocenter Parkway.

The city of Phoenix is trying to save one of the Valley’s aging shopping malls. It has approved a plan to revitalize Metrocenter and surrounding neighborhoods in northwest Phoenix.

Anyone who has lived in the Valley for a long time probably remembers the excitement when Metrocenter opened more than 40 years ago. It was promoted as the largest shopping mall in the country. Robin Mofford grew up near the mall during the 1970s.

"At the time that Metrocenter was originally developed, I was 17. And I recall the empty fields and it was to become the prime area where you could meet all your shopping needs in one place” Mofford said.

During its first three decades, Metrocenter was pretty successful. It was the cool place to go to see a movie or do some ice skating. It has nearly 1.5 million square feet of retail space, but when the recession hit a few years ago, store after store closed, and now about a third of the mall is vacant.

Music plays from a loud speaker at Metrocenter’s Castles N’ Coasters miniature golf course.  But there’s nobody around to hear it.  Granted it is 11 a.m., but the parking lot surrounding the mall is almost empty.

Sherry Dudek has lived near Metrocenter for more than 20 years and she's with a neighborhood block watch group.

“I do see that this area needs new development. It needs new businesses to come in,” Dudek said.

She said the mall’s financial challenges are creating problems in the community.

She hopes curbing crime will help Metrocenter bounce back, but she’s concerned about the businesses that could open there.

"I don’t want to see them put in 15 sports bars or have off-track betting. Everything has to be balanced out,” Dudek said.

Last month, Phoenix City Council approved a redevelopment plan for Metrocenter that includes nearby neighborhoods that stretch to North Mountain.  Councilwoman Thelda Williams is leading the city’s effort to bring new life to the district.

“This is a prime example of how you can do a large infill project in Phoenix. We have not had that opportunity before and I say this is the place to do it,” Williams said.

She's trying to connect Metrocenter with the Valley’s light rail system, but that would require a bridge across Interstate 17 and the Arizona canal.

"If we had light rail you could park at Metrocenter and hop on that light rail and takes it right off of I-17,” Williams said.

The city of Phoenix is dealing with a massive budget shortfall, but Williams said Metrocenter redevelopment will move forward. That’s where Louis Snow comes in.  He created a North Phoenix business group that’s looking for ways to pay for improvements that will benefit the mall and small independent businesses.

"The funding is going to be limited through the city of Phoenix, so we have to go outside and that’s going to be through the grant process, because the community itself doesn’t have the money, I can tell you that," Snow said.

More than half of the residents in the area make less than $50,000 a year, according to the U.S. Census. The owners of Metrocenter are also looking for investors to help with redevelopment expenses.

Warren Fink is with the Carlyle Development group in New York City that purchased Metrocenter while it was in bankruptcy two years ago. He wants Phoenix to approve new zoning rules for the mall.

"Allowing us to bring uses such as office, medical office such as health care facilities.  We would love to see some sort of multi-family or senior housing brought to that site. We’re talking to a college about taking one of the vacant department stores,” Fink said.

He added his group also wants to put a high-rise building at mall. But some neighbors are concerned that a 15-story structure would be an eyesore and it might create more traffic. Some residents are worried the city may raise taxes to help pay for the improvements, but others say they don’t mind a small tax hike if that means their home values would increase.