Phoenix Approves Up To $500,000 For Farmers Insurance Exchange 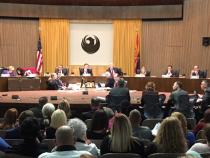 Farmers Insurance Exchange plans to expand its footprint in Phoenix. In exchange, the city will pay the company up to half a million dollars.

The insurance company plans to move its estimated 500 current employees into a new building near Interstate 17 and Pinnacle Peak Road. That’s also where Farmers says it intends to create another 1,000 jobs to be phased in between 2016 and 2019.

As part of a deal approved by council members on Wednesday, Farmers will be able to collect up to $500,000 for workforce training. The company would get $1,000 for each new employee who makes more than $44,000 a year. The first payment would come after Farmers creates 200 new jobs.

A city report cites a third-party economic impact analysis that indicates the direct revenue to Phoenix will be about $23.7 million over 10 years.