Judge To Decide If Oregon Standoff Arrestee Ritzheimer Can Be Released 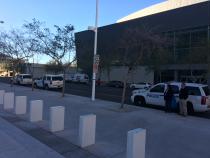 (Photo by Jude Joffe-Block - KJZZ)
Extra security vehicles were seen at Sandra Day O'Connor U.S. Courthouse in downtown Phoenix during Ritzheimer's detention hearing on Tuesday afternoon.
(Image via Memorandum in Support of Pretrial Detention)
Photos of Jon Ritzheimer were listed in the government's detention filing.
(Photo courtesy of the Maricopa County Sheriff’s Office)
Jon Ritzheimer was arrested in Arizona in connection to the Oregon standoff.

A federal judge is deciding whether an Arizona man who is facing a federal criminal charge for his role occupying an Oregon wildlife refuge can be released while the case against him continues.

Jon Ritzheimer and 10 others who were involved in the armed occupation of the wildlife refuge have been charged with conspiring to impede federal officers from discharging their official duties.

Ritzheimer appeared in court Tuesday afternoon in shackles and a striped inmate uniform. Federal prosecutors want him to remain detained as his criminal case continues in Oregon federal court.

Assistant U.S. Attorney Lisa Jennis told U.S. Magistrate Judge Eileen S. Willett that Ritzheimer is unsuitable for release because he is a flight risk, a danger to society, doesn’t follow rules and “has demonstrated over and over his willingness to die.”

Jennis used the many videos Ritzheimer posted to social media to bolster her case. She played segments of a number of videos in court.

In one video Ritzheimer posted this past New Year’s Eve, he is seen in a car saying, “I am 100 percent willing to lay my life down to fight against tyranny in this country.”

Jennis also cited Ritzheimer’s support for militia movement and his outspoken stance against Islam. She showed a photo of Ritzheimer at a protest against Muslims in which he is seen wearing a t-shirt that says “[expletive] Muslims.”

Kruschek said Ritzheimer is a father, husband, veteran and church-goer with no history of violence.

She said while his views “may be upsetting to some people, they are not illegal.”

Kruschek said her client was diagnosed with PTSD and back injuries and receives treatment at the Veterans Administration. When asked by the judge what medications Ritzheimer is on, Kruschek acknowledged he had a medical marijuana license but said he knew he would not be able to use it if released.

Kruschek said other defendants had been detained without bail to prevent them from rejoining the occupation, but said in Ritzheimer’s case he could be barred from traveling out of Arizona with the exception of attending court appearances in Oregon.

So far six of the other defendants are being held without bond. Two have been released and two others are awaiting their detention hearings.

Willett had not yet issued a ruling about Ritzheimer's detention as of Tuesday evening.

Several people who appeared to be supporters of Ritzheimer, including his wife, filled part of a bench in the front row. The hearing also drew a number of people who oppose Ritzheimer, particularly his statements against Islam.

Jaime Steele, who said he belongs to the Islamic Community Center of Phoenix, said he came to watch in the hopes the judge will keep Ritzheimer detained without bond.

Steele said he first learned of Ritzheimer when the activist organized a protest of Steele’s mosque last year.

“He is known to travel, he can get up and go as he pleases at the next rally, flee the state,” Steele said. “We need to ensure the safety of the community is taken into consideration.”